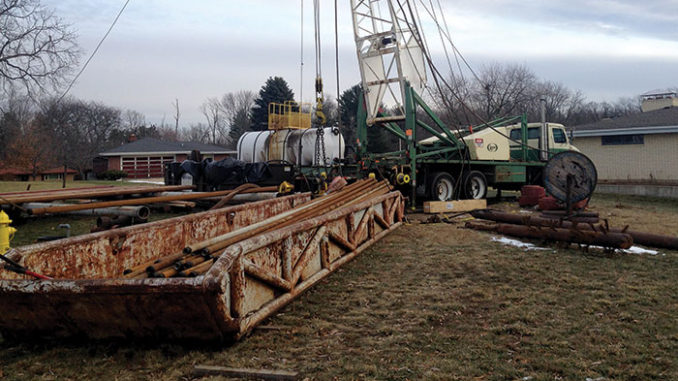 Often overlooked, well development is critical and can determine if a well system will be a burden or an asset.

The nature of well design and construction continues to change. Extending drought conditions, lingering effects of the recession, and a growing concern with produced water quality have resulted in the industry looking beyond the traditional “25-year well.” In fact, many communities are requesting a target lifespan of 50 to 75 years for new wells.

This is in addition to a growing focus on materials selection and increased scrutiny to minimize footprints, reduce spoils, and improve construction water management.

The word “development” is one frequently used to describe the final stages of new well construction, a maintenance activity, or a rehabilitative effort on an existing well. The word under-defines both the activity and the importance of this process, though.

Well development occurs towards the end of well construction, a time when the budget is often spent and the customer is eager to see the project completed. In some cases, individuals tasked with oversight of the project may not understand the importance of development, or development is thrown lump sum to a subcontractor tasked with setting the pump.

Well development is not a secondary issue; it is a key element that sets the stage for the well, defining whether it will be a problem child or an asset. As such, it could be argued development is the most important process of completing a new well, while remaining the least emphasized and funded.

Perhaps most important, development is an abbreviated term significantly diminishing the understanding of what this critical process actually is. The process is more accurately developing efficiency. All wells are constructed in such a manner that none of them begin as a highly efficient subsurface hydraulic structure (i.e., wells are highly inefficient to begin with).

As such, the final process of well installation is the “development of efficiency”—and involves all the steps necessary to increase the efficiency of the well to what might be considered an acceptable standard.

The consequences of inadequate development are a well producing less water for an equivalent input of energy when compared to an efficient well, and producing far more energy (e.g., electricity, diesel fuel) than an efficient well. Even a small impact in energy costs can mean a significant cost burden over the life of the well.

In addition to nuisance organisms such as sulfate-reducing bacteria that produce hydrogen sulfide odors, many environmental coliforms take up residence in these areas. As long as the flow profile is impacted, the anaerobic presence can continue to haunt produced water quality despite even the best disinfection efforts.

The remnants of drilling fluids within the well and borehole aquifer interface can impact microbial populations too. Many of the polymers used to enhance drilling muds contain phosphates. As the polymers degrade over time, minor phosphate residuals are released into the well, oftentimes resulting in macronutrients or stimulants for bacterial activity.

The same polymers impacting microbial growth can result in discoloration of the produced water, imparting a tint to it from fine particulates in suspension. Beyond an aesthetic problem, fine particulates can be problematic for newer water treatment systems. Membrane filtration, reverse osmosis, and other forms of advanced treatment are particularly susceptible to sediment influence. These influences not only degrade the treatment systems, but can cause considerable expense in operation and maintenance.

Effective development is a function of proper well screen, gravel pack, and wellbore size selection. Improper sizing of any one of these components can have an impact on the development energy transfer needed to maximize the efficiency of the well.

Developing efficiency is achieved by the effective application of energy and will more than likely require multiple forms of energy—for example, mechanical and chemical—to achieve the increase in efficiency desired in a new well. As such, development is a process in which various means and methods are employed with one purpose in mind, which is to make a well as efficient as feasible.

Albert Einstein once said, “Everything should be as simple as possible and no simpler.” In that light, defining development is perhaps easier if considered as “the minimum effort required to obtain the highest percentage efficiency feasible, and no less.”

There will be a point of diminishing returns, and often that point is when the specific capacity of the well does not increase relative to the amount of time and effort employed in developing the well.

As stated previously, there is a relationship between the development of efficiency and the time expended to develop it. Lack of sufficient development time and lack of an effective means of measuring increasing, stable, or decreasing development success are two of the first challenges to proper well development.

There is a belief most wells in the same area will take about the same amount of well development, particularly rig development time. A recurring theme is a need for effective utilization of enough energy in the correct place, as a foundational concept of well development. Some individuals hold four to six hours of airlifting a well is sufficient pre-development, and any residual development needed will be accomplished by pumping. Unfortunately, this is more often not the case.

Clear water, or the lack of visual turbidity, is an insufficient indicator of sufficient development. On several occasions, downhole video surveys conducted in a newly developed well prior to the rig demobilizing from the site revealed there was considerable drilling fluid, residual drill cuttings, or fill present in the well.

In addition to the lack of visual turbidity and the absence of sediment, evaluating the electrical conductance (conductivity) is an effective means of evaluating development efforts. Conductivity measures the combined total of inorganic and organic substances present in a liquid by measuring the ability of water to pass an electrical current. In reference to normal background levels, a well still shedding sediment, drilling fluid, or other detritus will typically exhibit a much higher conductivity.

While not a replacement for full chemical analysis of the well, this simple field test is a handy method of tracking the effectiveness of development efforts. Evaluating other field parameters including pH, alkalinity, oxidation reduction potential (ORP), and chemical signatures unique to the fluids used can also assist in tracking development efforts.

The termination of development should be results-based and not just a fixed number of hours with the hope that it will be sufficient. Drilling and pump contractors should charge for the development time it takes to accomplish effective and efficient well efficiency development.

How to Become a CPI
To help meet your professional needs, this article covers skills and competencies found in DACUM charts for drillers and pump installers. DO refers to the drilling chart and PI represents the pumps chart. The letter and number immediately following is the skill on the chart covered by the article. This article covers: DOB-6, 7, 8; DOF-2, 4, 5, 6; DOG-1, 3, 4, 5, 6, 9

ore information on DACUM and the charts are available at www.NGWA.org/Certification and click on “Exam information.”

With regards to rig development time, the drilling rig is almost always the most powerful and versatile piece of equipment available for at the least the preliminary development efforts. As such, the heaviest drilling fluids and clean screens or perforated casing should be the primary development objectives of rig-based development.

Perhaps the greatest plague of development is it rarely is performed with a sufficient amount of energy to accomplish the task. A drilling rig can provide a direct means of expending considerable energy (e.g., rotation on the short axis and reciprocal along the long axis of the well casing, along with introducing varying pressure regimes using such things as swab/isolation plates and airlifting procedures) and has the greatest chance of reducing the residual debris adhering to the casing and screen. So without actually performing a visual inspection of the well prior to rig demobilization, it is possible to hand over to a pumping developing team a well plugged and inefficient.

Along with that concern is the belief a pump alone is capable of providing a sufficient pressure differential within the well during development. This misassumption assumes the pump can address the entirety of the submerged section of the well and generate sufficient flow at a high enough entrance velocity. Even upsizing the pump often fails to generate the necessary flow to break down the filter cake on the borehole wall/gravel pack interface, let alone provide sufficient energy to flush the debris into and out of the well.

A good development program often includes multiple methods, including both mechanical and chemical efforts. The selected program should be based on the drilling method, geology, well design, and overall completion with respect to challenges that occur during construction.

Chemical methods generally target the formation and area of interaction, with selection based on the geology and specific fluids used during the drilling process. Chemicals commonly used during the development process include wetting agents (surfactants), chlorine (oxidizers), acids, and polymers such as clay dispersants or clay breakers.

Delays at the end of the well building process can result in extended time and efforts due to settling out of drill fluids in the formation and the gravel pack. The development time will increase the longer the drill fluids are in the wellbore.

Development is not isolated to new wells. Wells mature, meaning they become less efficient and economical, and consume more energy for less yield over time. If they start out inefficient, if their efficiencies are not maintained, then they will mature more rapidly and perform less efficiently more quickly. As an asset, a well serves the longest and most economically when it begins at a high efficiency and is maintained.

Development should be discussed prior to construction—in fact, the thought process for well development starts when the test hole is drilled. It is strongly recommended development be discussed as part of the well design and bid process.

As part of the goals of development, there should be clear expectations as to the responsibilities and objectives of the effort. Methods should be discussed and approved with benchmarks established ahead of time. All parties should be a part of these discussions. Key issues should include:

As the nature of groundwater use changes and we as an industry are faced with more challenges with regards to production and water quality, recognizing and acting on a better understanding of the importance of development is essential. Poor or incomplete well development can impact well efficiency, water quality, maintenance efforts, and severely affect the operational lifespan of the well.

In essence, development defines the well as a groundwater resource.

Christopher S. Johnson, PG, CHg, is the president and principal hydrogeologist at Aegis Groundwater Consulting in Fresno, California. Johnson works with well owners and operators on a variety of groundwater-related projects including locating new water resources, well design, and construction management, aquifer testing, and well rehabilitation. He can be reached at aegisgc@gmail.com.

Michael J. Schnieders, PG, PH-GW, is the president and principal hydrogeologist at Water Systems Engineering Inc. in Ottawa, Kansas. He has an extensive background in groundwater geochemistry, geomicrobiology, and water resource investigation and management. He specializes in the diagnosis and treatment of fouled wells and potable water systems. He can be reached at mschnieders@h2osystems.com.