A fun aspect of attending an event like NGWA’s Groundwater Week is you never know who you might run into and strike up a conversation with. 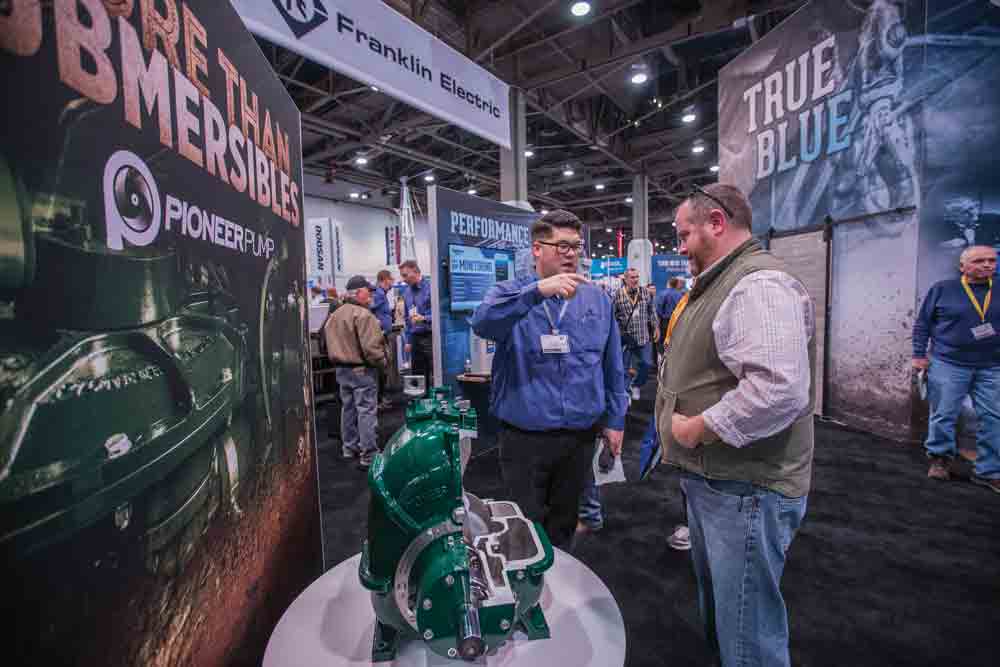 Whether it’s getting to know someone, talking shop, or both, rubbing elbows has always been a mainstay of the industry’s largest annual convention and trade show. It was no different at Groundwater Week 2018. Attendees and exhibitors alike picked up timely and
relevant information that made them better professionals upon returning to their jobs.

Groundwater Week 2018 drew 5116 attendees, making it the seventh largest show in its 70-year history. Held December 3-6 in Las Vegas, Nevada, attendees hailed from 36 countries, in addition to the United States. All sectors of the industry—water well system professionals, manufacturers, suppliers, and scientists and engineers—were represented.

The Exhibit Hall inside the Las Vegas Convention Center was abuzz as 286 exhibitors displayed their products on 73,000 square feet of exhibit space for 12 hours over two days. There were 31 first-time exhibitors in 2018, up from 25 in both the 2017 and 2016 shows.

“It was another tremendous and exciting Groundwater Week,” says NGWA CEO Terry S. Morse, CIC. “The attendees, sponsors, exhibitors, and presenters all came together to make this a premier event.”

The first workshop of Groundwater Week 2018, “Water Well Design by the Numbers,” kicked things off as 130 attendees learned under two of the industry’s top teachers. Past McEllhiney Distinguished Lecturer Marvin F. Glotfelty, RG, and David Kill of Goulds Water Technology led the session on proper well design for residential and large capacity application. The workshop material covered could have easily been taught over a weeklong span, but Glotfelty and Kill went over it in four hours.

“I enjoyed those guys. They kept your attention,” says Jacob Crabtree, CWD, CVCLD, owner of Crabtree Drilling LLC in Springfield, Ohio. “They spoke well, and that’s always a big thing when you’re sitting there to keep your attention. They were really on point with everything.

“That was one where I could’ve sat through another four hours and got a little more depth from it. That was one of the best classes I’ve been to aside from going to a pump or drilling school.”

For Crabtree, it was a pleasant surprise in who he met sitting next to him in the workshop: Dick Decker, CWD, equipment supervisor for Bertram Drilling Corp. in Billings, Montana. The two spoke many times over the phone about geothermal projects the two companies had worked on together dating back to the mid-1990s, but they had never met in person.

Crabtree learned that Decker uses the same drill rig, an Ingersoll-Rand TH60, on large diameter wells. He picked Decker’s brain on recent work done in California. Crabtree also sat next to an attendee from south of Jackson Hole, Wyoming, who shared with Crabtree his struggles drilling through unconsolidated materials of large boulders.

“It’s just fun to hear other guys’ experiences and you can always gain knowledge in this industry,” Crabtree says. “As soon as you think you’re done learning, you might as well quit because things are progressing every day.”

Among other topics discussed in the workshop, the shift from using lineshaft turbine pumps to submersible turbine pumps due to the use of variable frequency drives was shared. Following the workshop, Glotfelty says he fielded many questions about the local challenges
contractors face in their respective region.

“I was able to give them well design tips that apply to their situation,” Glotfelty says. “There were also a number of questions about falling head testing in pilot boreholes, and I had several requests for the white paper I wrote on that topic.”

Like in 2017, many workshop panels took place in 2018 covering key industry topics.

One such panel was the “Supply Chain Survival in the Age of Amazon,” which featured representatives from three of NGWA’s membership sections—manufacturers, suppliers, and contractors—a first at Groundwater Week.

The workshop panel, an idea by Randy Carnes of Preferred Pump & Equipment LP, tackled the effect of Internet sales on the groundwater industry. Carnes, who serves on the NGWA Suppliers Section Board, answered several tough questions from the 50 individuals in attendance, along with the other panelists. Representing the contractors on the panel were NGWA Past President David Henrich, CWD/PI, CVCLD, and Chauncey Leggett, CWD/PI.

To help spur interaction, attendees were given the option of tweeting their questions to the panel on Twitter using the hashtag “GWWeekSupply.”

“If I had to choose one take-away from this panel discussion, it’s that we can learn more about this topic together in one room than we’ll ever learn individually,” says Greg Beach of Geo-Hydro Supply Ltd. and chair of the NGWA Suppliers Section Board who participated on the workshop panel.

“There are no perfect answers to supply chain survival in this age of Internet sales, but if we listen to each other, we’ll all be more successful. This was a great start, but this issue will not be solved or go away any time soon. It will likely be more pronounced in 2019.”

Another workshop that drew interest was “Performing Plumbness and Alignment Tests—The Lost, But Essential Art,” where 170 attendees learned from NGWA Past President Roger Renner, MGWC, NGWAF.

“Excellent delivery by Roger. The audience was engaged and quiet. Roger provided a free computer program to take the mystery out of plumbness and alignment.”

The industry continues to learn how best to prepare for Tier 4 engine standards, and the maintenance of these diesel engines was covered by Past McEllhiney Distinguished Lecturer Fred McAninch of The Rig Doctor’s and Blake Fahl of Versa-Drill/Laibe Corp.

They highlighted how important properly scheduled maintenance is on the high powered and technically sophisticated diesel engines. They also emphasized use of the manufacturer’s suggested lubrication oils is critical to the proper operation and longevity of the engines.

For those who weren’t up to speed on the Occupational Safety and Health Administration crane standard, the workshop “2018 OSHA Crane Rule for Cranes in Construction” helped fill in the gaps. John Fowler, CSP, CMSP, of National Exploration, Wells & Pumps kept the attendees engaged and answered questions at the close of the workshop.

“It’s a must for people in our industry who have limited knowledge of this topic,” Becker says.

The NGWA Activity Areas located in the Exhibit Hall returned for the fifth consecutive year. They are designed so attendees can learn skills applicable to their job in a close setting ideal for interaction.

In the Exhibit Hall at the Grundfos booth, attendees gathered to watch the Guts and Glory WaterPRO Championship to see who could record the fastest pump assembly time. Jason Johnson of A-1 Water Well Services Inc. in Lindsborg, Kansas, won the event and earned $10,000.

“We did this to build relationships with our customers and to really celebrate the contractor and the skill that the contractor brings to the market,” says Dan Story, vice president of groundwater/irrigation for Grundfos.

Decker, Bertram Drilling’s equipment supervisor, visited with drill rig manufacturers, including Schramm Inc., in the Exhibit Hall as his company is looking to replace its older drill rigs and weighing its options. He also spoke with Centerline Manufacturing LLC, which promoted its new Hyperformance mud pump.

“It’s nice to see and talk to acquaintances throughout the industry,” Decker says.

P.W. Gillibrand Co. Inc., which supplies filtration sand and is based in Simi Valley, California, was among the 31 first-time exhibitors at the show.

Also new to the show this time was MyWaterWell, which provided free trial and subscription plans to the world’s first graphically-based data management software for the groundwater industry.

History was made at GroundwaterWeek 2018 during the NGWA Delegates Meeting and Reception.

Scott King, PG, P.Geo, LHG, became NGWA’s first president to come from the Scientists and Engineers Section in the Association’s 70-year history. King received the gavel from past president Henrich amid a standing ovation. King, who credited the past presidents for setting the stage for him, said he is committed to being president for all four membership sections of NGWA.

“Even after a year of knowing I would be in this position, to finally stand in front of the delegates and feel such positive support from those in the room was just a terrific thrill for me,” says King, senior associate hydrogeologist for Wood Environment & Infrastructure Solutions. “I know that together, we are going to have a good year.”

Tory Donnelly and John Boyette Jr. were elected to the NGWA Board of Directors during the Delegates Meeting. There were 213 delegates who voted at the meeting.

Donnelly, who became the first female to serve on the NGWA Contractors Section Board of Directors in 2015, was elected to her second term as NGWA director. This marks Boyette’s first term.

Like in 2017, attendees took part in a morning coffee networking session with the NGWA Board of Directors and CEO Morse on the last day of the show.

New this year was the Groundwater Foundation Silent Auction and Reception, which preceded the NGWA Delegates Meeting. The Foundation raised approximately $35,000 to support the industry during its auctions, scavenger hunt in the Exhibit Hall, and Putt for Groundwater competition.

“A big thank you to all those who donated items and to those who placed bids,” Morse says.

At the Keynote Presentation and Awards of Excellence Ceremony, motivational speaker, author, actor, and retired U.S. Army soldier J.R. Martinez brought energy and inspiration to Groundwater Week attendees. Martinez received a standing ovation at the end of his presentation.

“His insight and words of perseverance were beyond our expectations. We thank him for not only presenting, but for his military service and sacrifice,” Morse says.

The NGWA Awards of Excellence recognized individuals and companies that have made significant contributions to the industry.

Three NGWA past presidents received awards: Jeffrey Williams, MGWC, CVCLD (2016), was given the Robert Storm Intersectional Cooperation Award for fostering community among all groundwater professionals. Daniel T. Meyer, MGWC, CVCLD (2013), won the Standard Bearer Award for his involvement in the legislative process of NGWA. John Pitz, CPI, NGWAF (2012), was given the Life Member Award for contributing a special service in the furtherance of the groundwater industry or to NGWA.

The Supplier of the Year Award went to Randy Lyne of Preferred Pump & Equipment LP. 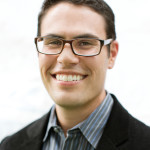 Mike Price is the senior editor of Water Well Journal. In addition to his WWJ responsibilities, Price contributes to the Association’s scientific publications. He can be reached at mprice@ngwa.org.