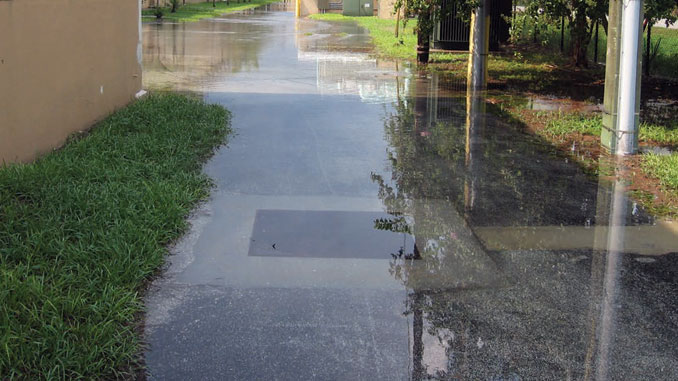 Aside from the immediate and obvious damage, flooding can impact well systems and aquifers for years.

Flooding is regarded as the most common environmental hazard impacting mankind. This is a
reflection of the large expanse, topographically, of rivers and coastlines as well as our historical tendency to settle homes and cities in floodplains and low-lying coastal areas.

Flooding is a natural phenomenon typically related to meteorological events such as intense or prolonged storms. Seismic events generating storm surges or tsunamis, or that impact landforms
or containment structures, can also be responsible for flooding.

Aside from direct damage to infrastructure or the limiting of access to well systems, one of the challenges our industry faces is dealing with the after effects of wells and watersheds that have been flooded.

This is key. The occurrence of highwater events can impact a well beyond the immediate submergence of the wellhead and can alter conditions within the watershed that influence an aquifer for
an extended number of years.

Wells that are susceptible to flooding or potential contamination include:

• Older wells completed in areas now designated as floodplains
• Wells in which the casing is not finished above the high-water level
• Wells not adequately capped or sealed, or older wells with shallow grout or insufficient surface seal
• Wells in areas structurally unstable, or where previous erosion or subsidence has compromised the structure and landform
• Wells with an abnormal affinity for bad luck.

Any well that has been flooded or is suspected of having been influenced by floodwaters should be viewed as unsafe for potable use until such time the well has been evaluated and tested to make
sure it is safe for use as drinking water.

Flooding of well systems can impact water quality and operation for many years if not properly addressed at the earliest possible time. Floodwaters can directly influence the well when debris
carried by the flood impacts the structure —damaging or destroying caps, vents, piping, and the well casing and pump components. Additionally, by destabilizing the ground around a well, flooding
can weaken the structural integrity of a well, jeopardizing the sanitary seal.

Any well that has been flooded should be viewed as unsafe for potable use until the well has been evaluated and tested.

Floodwaters entering the well introduce not only surface water with drastically different water chemistry and microbiology, but also sediments and a variety of foreign contaminants into the well system.

The World Health Organization notes that the major risk factor for outbreaks associated with flooding is:

the contamination of drinking-water facilities, and even when this happens, as in Iowa and Missouri in 1993, the risk of outbreaks can be minimized if the risk is well recognized and disasterresponse
addresses the provision of clean water as a priority.

Increased levels of bacteria and microorganisms and other “natural” contaminants like sewage and animal waste can be found in floodwaters. This contaminated water can enter the well casing through the top of the well or through defects and damage in the well’s casing or seal.

Additionally, floodwaters can mobilize environmental contaminants beyond controlled areas, increasing risks associated with contact. One of the most common examples of this is the mobilization of hydrocarbon spills and the appearance of rainbows and oil films on the surface of the water.

In addition to these health risks, floodwaters typically contain an elevated sediment load. Sediments found in the floodwaters can enter the well through vents and wiring conduits and cause mechanical fouling, increased wear of the pump components, and plugging of the aquifer.

When addressing a flooded well, the first step is to clear access to the well. Depending on the extent of the flooding, this may be a minor or an involved task. Remove all debris from the well site, including any standing water.

It is advisable to document this work, noting all damage as well as any containers that are present and visible discoloration of the water surface or vegetation.

The BSPs are not standards but practices that have been demonstrated to show superior results. They are prepared by a consensus of groundwater professionals. Go to www.NGWA.org for more information.

Immediately prior to this work, you should have the electrical components inspected to ensure none were jeopardized, which could cause added problems to the site during treatment. There exists
a significant danger of electrical shock, personal injury or death, and damage to the well, the pump, and the water system.

The initial objective for the well is to purge as much of the introduced material from the borehole. As needed, restore pump function and pump flooded wells for several hours to clear sediment
and floodwater from the borehole.

Do not pump this flushwater through associated treatment and distribution systems, but discharge it away from the well. The time required is dependent on well size, aquifer hydraulic conductivity,
and floodwater depth and quality. As few as three hours and as many as 24 hours may be needed.
It is recommended you purge the well until visual turbidity is gone and the conductivity has reached a normal level (typically less than 1000 mV). Visual turbidity is a means of evaluating a sample visually against an opaque background for signs of contamination or sediment.

Conductivity is the measure of the ability of water to pass an electrical current. Conductivity in water is affected by the presence of inorganic dissolved solids such as chlorides, nitrates, sulfate, and phosphate anions (negatively charged ions) or sodium, magnesium, calcium, iron, and aluminum cations
(positively charged ions).

As such, conductivity is an easy means of evaluating water quality. Typically, groundwater has a lower conductivity than surface water. Groundwater conductivity values change considerably, so it is advised that you secure a general background level from historical test records prior to using it as a means
of monitoring progress.

Once the well is flushed of the immediate threat, it may be necessary to conduct a video survey to assess any potential damage and document the well’s condition. This would be an important step if the well was exposed to prolonged influence from the floodwaters or was suspected of having damage and fouling
prior to the flooding event. During the video survey, evaluate the upper casing for signs of damage or instability, as well as the lower extension of the well for accumulations of sediment and
biological debris.

If prolonged exposure to floodwaters has occurred or if sediment infiltration is suspected, the pump and associated equipment should be removed from the well. Disassembly of the pump is recommended for effective cleaning and removal of biomass and sediment accumulations. After cleaning, the pump
and column pipe should be evaluated for corrosion and material degradation that may have occurred as a result of the congested water and sediment present.

Disinfection of a flooded well is necessary if major impaction of the well is confirmed or even suspected. A combined chemical and mechanical cleaning of the well may be required too. Well system owners often postpone maintenance or have a “run to failure” mentality, so it is fairly common for flooded
wells to be chemically and mechanically cleaned before returning to service.

If cleaning of the well is needed, balance the mechanical efforts with the structural integrity of the well. The chemicals used for cleaning should be selected based on the suspected fouling mechanisms present and the materials used in well construction. As with all well rehabilitation projects, the chemicals selected should be NSF Standard 60 approved for their use in potable well systems.

After the well has been purged of floodwaters or cleaning efforts have been completed, a multi-volume, pH adjusted chlorination treatment is recommended as a means of disinfection prior to returning the well to active service.

Chlorination should use a pH adjusted chlorination treatment of a 200 ppm chlorine level in a pH range of 6.5 to 7. Using 10% strength sodium hypochlorite, this is equal to 1 gallon of chlorine per 500 gallons of treatment volume. The volume of the disinfection solution should be equivalent to three times the standing static volume of the affected well. It is not recommended to use more than a 500 ppm chlorine
concentration.

There are several commercially available products on the market that aid in buffering of the pH to an effective level during chlorination. Various products have additional benefits such as increased penetration of biomass and surfactant qualities to increase the zone of treatment. When choosing the best product, we recommend selection of an NSF-approved chemical that accounts for the water chemistry (pH and total alkalinity) and the strength and type of chlorine used to allow for best results.

The disinfection solution should be blended above ground and introduced into the well by a tremie pipe or similar treatment method. Efforts should be made to evenly disperse the disinfection solution evenly throughout the well, including the bottom of the well. Once the solution is placed into the well, it should
be agitated to disperse the solution all throughout the entire column. Swabbing of the well, cycling of the pump, or a pump-to-tank surging is recommended.

Following agitation, check the chlorine residual within the well to assure sufficient strength is present. If the residual has diminished below 100 ppm, add additional sodium hypochlorite to raise it to that level.

It is important to note if you are unable to maintain a chlorine residual during disinfection, this may indicate additional flood contamination remains and more invasive cleaning is needed. High levels of organic material, dissolved solids, and variable pH levels (all associated with floodwater) can degrade chlorine concentrations during  treatment.

Allow the chlorine solution to remain downhole overnight. The following morning, check the chlorine residual within the well to ensure sufficient strength has remained. If the solution has fallen below a 50 ppm residual, additional disinfection or cleaning may be necessary.

Once sufficient disinfection has been achieved, begin evacuation of the well. Purge the well until the chlorine has been evacuated (total chlorine is <0.2 ppm) and all debris has been removed from the well as identified by visible turbidity.

Following removal of the chlorine, collect a water sample and test for required water quality parameters, including total coliform bacteria presence and nitrates. Conduct pipeline and water system disinfection of associated components per state rules or recommendations. Once final disinfection efforts are
completed, the well should be returned to an active operating schedule as soon as possible and not allowed to sit idle for any extended period of time. If major structural damage has occurred to the well, or the well is substandard at inspection, or does not respond to chlorine treatment, more invasive cleaning, repair, or replacement may be needed.

Although all wells should be periodically monitored and evaluated, it is especially important that follow-up evaluations be conducted on flooded wells. The evaluations should include periodic water testing to make sure disinfection (or cleaning) was sufficient, and no contaminants have impacted the aquifer and watershed and have migrated into the well.

Additionally, within six months of the receding of floodwaters and again after one year, the well site should be evaluated for subsidence or other changes to the land within the vicinity of the wellhead.

Flooded wells are often just one problem often during a deluge of problems that can have far-reaching impacts. Understanding the well and the steps necessary to get it back online are important. And the risk of problems from flooded water systems can be minimized if the risk is recognized and response plans are set in place beforehand. 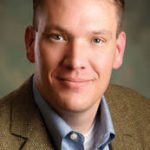 Michael Schnieders, PG, PH-GW, is the president and principal hydrogeologist at Water Systems Engineering Inc. He has an extensive background in groundwater geochemistry, geomicrobiology, and water resource investigation and management. He specializes in the diagnosis and treatment of fouled wells and potable water systems. Schnieders is the 2017 McEllhiney Distinguished Lecturer in Water Well Technology. He can be reached at mschnieders@h2osystems.com.