Groundwater professionals rose to the occasion and aided heroic rescues.

Twice in the first decade of the 21st century the world watched in horror as miners were trapped hundreds of feet below ground. 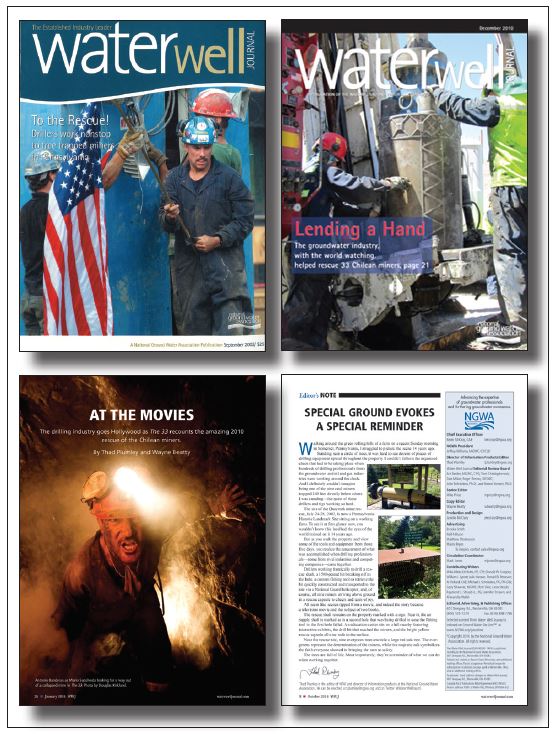 Both times, groundwater professionals rose to the occasion and aided heroic rescues in which every miner was brought up alive and reunited with their families.

Also on both occasions, Water Well Journal was there to document the stories with award-winning coverage.

The first story unfolded in Somerset, Pennsylvania, when nine miners at the Quecreek coal mine broke through a shaft into a neighboring abandoned mine with a machine, causing millions of gallons of water to drain into the Quecreek mine. The miners were forced to move to a high point deeper into the mine. And then hope.

“To the Rescue” is the article WWJ published in its September 2002 issue that recounts the amazing story of how groundwater professionals from the area rushed to the scene, devised a drilling plan, overcame obstacles—that’s what you call a 1500-pound bit breaking off in the hole—drilled the hole, and completed it so the miners could be rescued four days later.

The article was authored by WWJ Editor Jill Ross. Written with sections broken into days and times, it was a detailed account of the around-the-clock heroics of the groundwater industry giving of their time and services to save nine fellow residents. The article won an APEX Grand Award in 2003, the highest honor given by Communications Concepts.

Mike Poole of Union Drilling told Ross the perfect comment to end the article: “We were not different drilling industries. We were just drillers. There were no egos or competition; just a lot of selfless people working together. It was a great day for the industry.”

WWJ closed the year with an article in the December 2002 issue titled “The Rescue Remembered” in which several WWJ staff members wrote short features about the industry professionals and companies who were part of the incredible effort.

The event was even highlighted once again with an Editor’s Note in the October 2016 issue titled “Special Ground Evokes a Special Reminder.” I authored it after visiting the site which is now a Pennsylvania Historic Landmark Site.

A Schramm T130XD drilling rig, nicknamed “The Miracle Machine,” was brought on the site from Geotec Boyles Bros. S.A., a U.S.-Chilean company based in Santiago, Chile. The rig used a team that included Jeff Hart, an operations manager for Layne Christensen (now A Granite Company), as well as engineers from Schramm Inc. and Center Rock Inc.

Like in Pennsylvania, the effort included surprises. The biggest was the rig’s bit getting damaged by a steel mine roofing bolt. Equipment was flown in from the United States to help fish out the broken bit, an effort which delayed drilling for four days.

The story was recalled in WWJ with the article “Lending a Hand” in the December 2010 issue. Authored by WWJ Senior Editor Mike Price, it won an APEX Award of Excellence in 2011.

Price wrote how several drilling professionals were welcomed at the White House where they were honored by President Barack Obama, who told them they had “inspired the world.”

Perhaps it was inevitable then that the story would become a movie. The 33 came out in late 2015 and WWJ was there with a review. Its January 2016 issue had “At the Movies,” an article in which Copy Editor Wayne Beatty and I reviewed the major motion picture.

Both of us enjoyed seeing the drilling industry on the big screen, and using a scoring system designed for two editors, gave it three red pens. Wayne summed up the movie perfectly.

“This is not a made-for-Hollywood movie where drillers are depicted as action figures. . . . No, the drillers in The 33 are presented as real workers just doing their jobs.”