With an increased workload and desire to control costs, Bill Ramsby unexpectedly stumbled into learning about diesel fuel contracts four years ago, and it’s been paying off ever since. 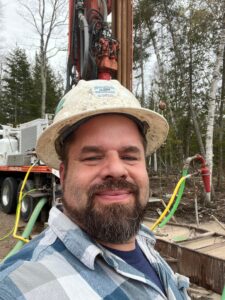 Ramsby Drilling Inc. in Indian River, Michigan, is paying $2.29 a gallon for diesel fuel in 2022 based on his contract. Speaking with Ramsby on his way to a jobsite on June 9, the price for diesel had just increased to $5.99 in the company’s area.

“I got locked in for 2022 a year and a half ago when I bought this year’s contract,” says Ramsby, a fifth-generation water well contractor who became company president five years ago. “We were ramping up work at an incredible rate, and I’m not a big forecaster, but I just knew diesel fuel is cheap and I didn’t think it’s ever going to get cheaper than this, and my supplier offered us a fuel contract.”

Typically, Ramsby can only sign a fuel contract one year in advance with his fuel supplier, Blarney Castle Oil Co., a Michigan-based, family-owned business, but he was able to do so for the first time ever for two years.

“I thought, you know, I can lock it in at today’s rate, and we’re so busy quoting wells for the next year,” Ramsby shares, “and when I quote a well, I like to price-lock the customer in. Price-locking fuel controls my cost so there’s no bad surprises for the customer when we actually do the well a year later, eight months later.”

To safeguard against having leftover diesel fuel at the end of the year, Ramsby historically purchases 8000 gallons less than what the company typically uses annually (50,000 gallons). His fuel supplier usually fills up his two 1000-gallon diesel tanks biweekly along with one regular gas tank and one propane tank (soon to be replaced by natural gas). The fuel supplier also emails Ramsby the daily rates for diesel fuel.

Fueling three drilling rigs, three service trucks, and an assortment of heavy equipment, Ramsby hasn’t had time to assess the amount saved on diesel fuel thus far in 2022. However, he says he smiles whenever he drives by a gas station.

“Of course, it’s been a wonderful benefit this year,” he says.

In today’s volatile climate with inflation hitting 40-year highs (8.6% in May) and the Federal Reserve recently increasing interest rates, most of Ramsby’s customers appreciate being price-locked in on a contract. He uses a contract that is part from his father, Mike, and what National Ground Water Association offers. Ramsby requires 50% as a down payment, and he will pre-buy all the materials then and store them at the shop.

“Since my dad’s time to mine we’ve warehoused more product than we ever have,” says Ramsby, whose company has served northern Michigan since the 1890s.

Based on positive revenue generated from two large drilling projects two years ago, Ramsby fortuitously stocked up on drilling fluid, casing, drop pipe, pipe, wire, and other materials in 2020. The value on the materials purchased then has only increased as supply chain issues and inflation have driven up prices.

Consequently, Ramsby has seen extra revenue based on charging customers today’s market price for these materials.

“My accountant says I should’ve kept money in the bank,” Ramsby shares. “I’ve always seen supplies on the shelf and rack as something durable and solid.”

Ramsby is putting the extra revenue to work by expanding the company’s shop, doubling the size of it by 6300 feet. He hopes to replace the use of the company’s propane tank with natural gas by this winter.

The company tends not to travel more than an hour from its shop in northern Michigan, but due to the influx of business it has been pushed to travel to the edge of its territory. If that’s the case, Ramsby adds a mobilization fee to cover its travel expense, which “comes back to realized savings on the diesel fuel as profit,” he adds.

“I have nothing bad to say about them [fuel contracts] at all,” Ramsby continues. “About three years ago on a fuel contract, I think I was spending 10 cents more per gallon than what you would buy at the store for about three months, and then things averaged out. I believe that year I was right on average of what you could buy, maybe a few cents cheaper than what you could buy it at the pump for, but it’s times just like this where it’s been really beneficial.”

Ramsby recommends fuel contracts for any contractor in the water well industry based on how the supplier can work to reach the allotted minimum amount. However, he understands some will have a hard time pivoting to doing something different.

“It’s kind of hard to break that cycle. People like to stay with what they’re familiar with,” he says.

While Ramsby loaded up on materials in 2020, the opposite is taking place in 2022. He’s currently drawing down his inventory because he doesn’t want to be stuck with materials that are worth less than what he paid for them. He also has yet to sign his fuel contract for 2023.

“It seems the more you watch the news you worry about the world, and next year it wouldn’t surprise me if diesel is 10 dollars a gallon or 89 cents a gallon,” he speculates. “You just don’t know. I should’ve pulled the trigger when it was $3.50 a gallon, but I was so busy in the office and kind of kept forgetting about it. It shot up and now $4.19 for next year [as of June 9].

“I think I’m in a position to wait it out a little bit. I’m putting in quite a bit of work on the books for 2023 and got a few wells scheduled for 2024. I really do like to lock in my rates and price-lock what I estimate people out at. It’s like playing the stock market or gambling. I think I’m going to wait a month or so and see what happens.”