The last 10-plus years have seen WWJ help professionals navigate a tricky future.

A decade into the 21st century, Water Well Journal continued to be there for groundwater professionals with critical information designed to help them serve their customers and run successful businesses. 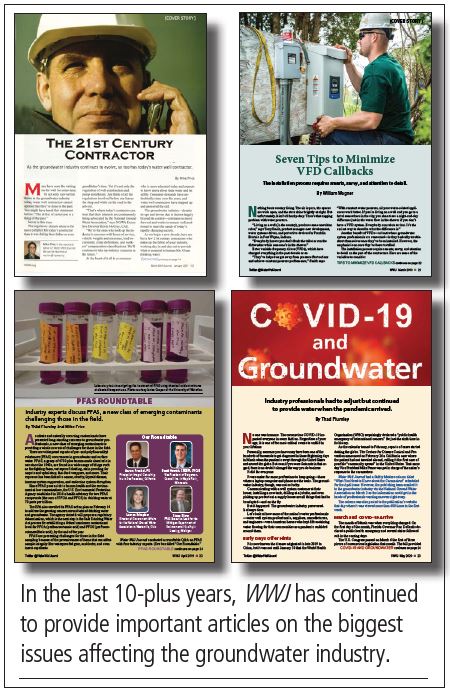 In fact, the first cover of 2011 showcased exactly that. The headline read “The 21st Century Contractor” and promoted an article where six groundwater professionals discussed what they viewed as critical to success in a new decade featuring a complex regulatory climate and consumers more educated than ever.

The contractors talked about a host of topics that are all still incredibly relevant almost 11 years later. Among their suggestions were exploring new revenue streams, knowing the political environment surrounding the groundwater industry, properly marketing your business, having the right business management tools, and having an exit strategy.

No doubt about it, all of those interviewed were forward thinking. As the last 10-plus years have unfolded, there have been even more topics emerge and become relevant today. Three of the most discussed have been variable frequency drives, PFAS, and finding new employees.

WWJ columnist Ed Butts, PE, CPI, celebrated the 20-year anniversary of his popular Engineering Your Business column with a column in the September 2021 issue looking back at the groundwater industry during the time of his column.

He noted in the last 20 years, “the primary changes affecting those of us in the water well and pump industry involve the increased use of variable frequency drives (VFDs), permanent magnetic motors, microprocessors and programmable logic controllers, and sonic drilling techniques.”

There’s a reason he listed VFDs first. Somewhat uncommon at the turn of the century, they are used seemingly everywhere today. WWJ has had several articles on their use in the last decade. Some popular ones in recent years were “Are You Well Connected?” in the March 2017 issue which discussed remote programming and the March 2018 article “Seven Tips to Minimize VFD Callbacks” which provided practical installation advice.

There is always a hot button “contaminant of the day” that seems to pull in all the attention of newscasters and newspaper articles. PFAS, though, has seemed different as they have garnered more attention than most and had staying power.

Seemingly in everything and everyone, they became something in the last few years that contractors were getting asked about from most customers. Knowing that, WWJ published a PFAS roundtable article in its April 2019 issue in which its staff interviewed four experts about the emerging group of contaminants. The four brought different perspectives and the article, which was honored with a 2020 Apex Award, provided a wealth of information for readers.

WWJ also won a 2021 Apex Award for its most in-depth look ever at the industry’s hiring situation. In response to a chorus of contractors, suppliers, manufacturers, and consultants all wondering aloud where the next generation of employees is going to come from, the publication ran a three-part series beginning in December 2020 and ending in its February 2021 issue titled “Workforce Development in the Water Well Industry.”

The articles, authored by WWJ Senior Editor Mike Price, covered finding employees, onboarding and training, and retaining employees. Altogether, the series provided more than a dozen pages of content about a critical issue with feedback from professionals all around the country.

The biggest story the last 10-plus years is one that is still unfolding. The COVID-19 coronavirus pandemic turned every industry on its side. WWJ was there when it began to emerge with critical updates for its readers in its print magazine, on its website, and on social media—and continues to provide new information when it emerges.

I authored an article in the May 2020 issue titled “COVID-19 and Groundwater.” In it, I showed how groundwater professionals answered the call as essential employees to keep the water flowing for their customers in the early months of the pandemic when there were more nervous questions than calming answers for everyone.

I was humbled it also won a 2021 Apex Award. After all, I was simply writing about our industry’s 21st century contractors answering their call.