WWJ Editor recalls some of his favorite articles in his time with the publication.

Looking back at 75 years of Water Well Journal has been a fun task the past 12 months.

Sure, heading to a basement storage room and digging through dusty old publications may not sound like a good time, but finding long-ago published gems has been a treat. There have been some sneezes and red eyes, but the excitement of finding well-written, educational
articles that still apply today outweighs everything. 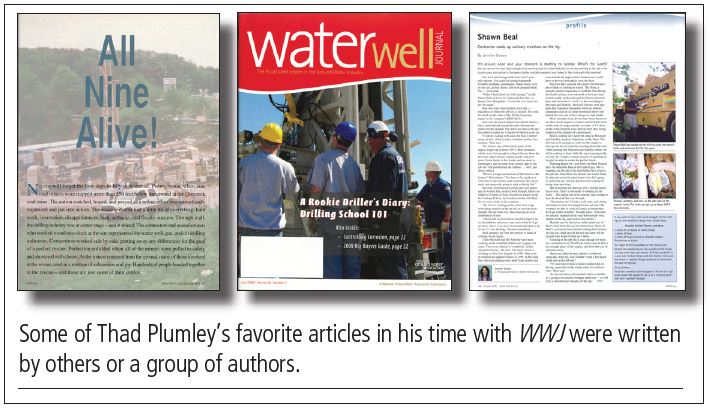 For this final anniversary article, I thought I would recall some of my favorites from my 21-plus years of being a part of the WWJ publishing team.

Surprisingly, the first articles that come to my mind are group efforts, two from early in my career and one somewhat recently published.

In December 2000 and January 2001, the WWJ staff put together a two-part series titled “100 Years of Drilling for Water.” I was the new guy on the staff as I started in March 2000 and researching and helping write those articles was my deep dive into learning about water well contractors and how they serve their customers.

The articles are easy reads and filled with great facts, interesting antidotes, images, and a detailed timeline. I still refer to them from time to time when I need a historical reference.

Just two years later, three of my colleagues and I authored “All Nine Alive!” a series of short profiles on the groundwater professionals who assisted in the rescue of nine coal miners trapped 250 feet under below the ground at the Quecreek coal mine for four hot July days in Somerset, Pennsylvania.

Published in the December 2002 issue, I remember talking to the folks for my contributions and thinking I was conversing with heroes. Since that article, I have been to the site in Somerset and now know for certain I was indeed talking to real-life heroes.

Another article I am really proud of was published in the April 2019 issue and is one I actually mentioned in last month’s installment of 75 Years of WWJ. We published a PFAS roundtable article in which Senior Editor Mike Price and I interviewed four experts about the emerging group of contaminants.

Some of my other favorite articles I didn’t write. Price authored a first-person account of attending the week-long GEFCO Annual Resource Drilling Fundamentals Training Seminar in the July 2008 issue that I think is just a great read.

Having been at WWJ for less than three months, Price was essentially thrown in the deep end when I sent him to school. He was suddenly sitting beside young contractors learning the in’s and out’s of the drilling process as if he was going to go home to a family business and serve as a contractor.

Titled “A Rookie Driller’s Diary: Drilling School 101,” Price wrote about each day and shared some of his “53 pages of notes on rigs, bits, mud, and more.” The article is well done—and Mike even ended up on the cover. That’s him standing on the back of the rig in the blue hardhat.

Jennifer Strawn, the senior editor from 2004-2007, authored a host of fun profiles on groundwater professionals that I had a blast recently reading again. In her four years, she wrote about a world-class water skier; a popcorn grower; a contractor who refurbishes vintage trucks; a driller who enters pumpkin chunkin’ events; and another who at lunchtime on the job wraps food in aluminum foil, sits it on the turbo of his rig’s 650 horsepower Cummins engine, and eats like a champion a few minutes later.

The article, which appeared in the October 2006 issue, contains an opening quote of, “Today, I had baked ziti with sausage.”

I mean how can you not enjoy a read like that?

There certainly have been countless fun articles, but more importantly, there have been thousands that are important to the water well trade, educational, and pushed our industry forward. I know I have been fortunate in my chair to author a few and read even more.