Water Well Journal moved into the 21st century when its January 2000 issue kicked off volume 54. However, it was a little more than one year later when things began to really look different for the industry publication.

The year 2000 saw WWJ’s January 2000 issue began with an editorial by Publisher Anita Bacco Stanley titled “Y2What?” The clever first sentence was: “If you are reading this, I assume Y2K wound up being less of a problem than some feared it might be.” 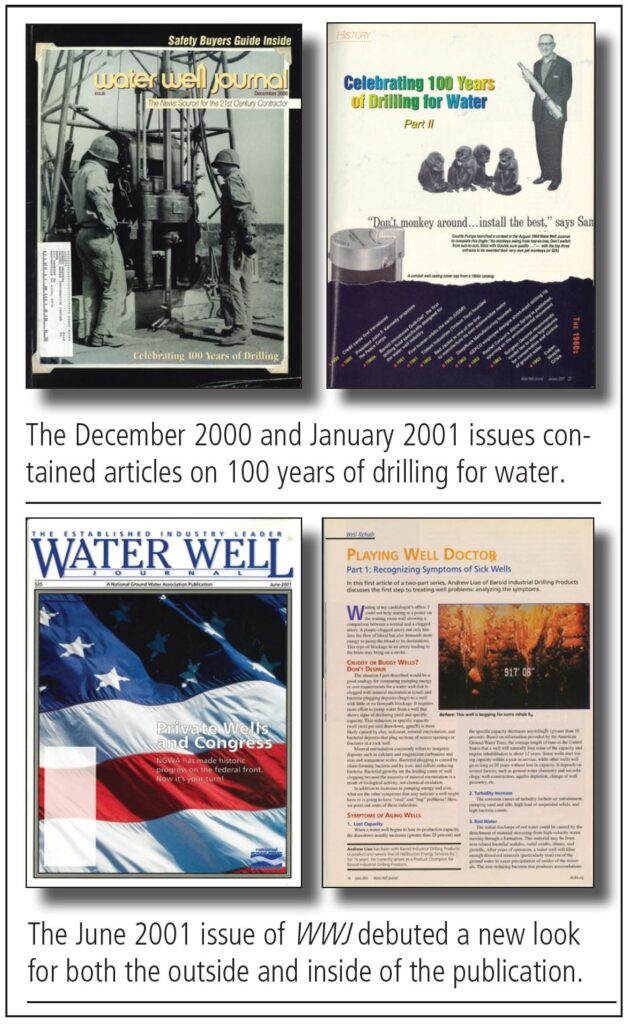 The column addressed data from a WWJ survey in 1999. Other topics covered in 2000 were the innovation of constant pressure systems, dealing with MTBE contamination, the importance of residential maintenance agreements locking in customers, and updating your office to include Internet technology.

The latter was highlighted in a guest editorial by Clint C. Whitmer in the April 2000 issue. In “My Fellow Drillers: It’s Time to Get Online!” Whitmer must have seemed downright crazy to some readers as he explained how images could be transferred via email and that the “Internet is the world’s largest library.”

WWJ wrapped up 2000 by kicking off a two-part feature story titled “Celebrating 100 Years of Drilling for Water,” which highlighted the major issues, inventions, innovations, and other fun facts about the drilling industry in the previous
century. The articles were put together by the entire WWJ staff with the first part published in the December 2000 issue and the second part wrapping things up in the January 2001 edition.

I joined the WWJ team in March of 2000 and working on the articles was the perfect homework assignment for someone brand new to the water well market. I soaked up a ton of information browsing through countless dusty issues of years gone by. As time-consuming as it was—and as often as I sneezed among the rows of library shelves—it remains one of my favorite projects that I’ve ever taken on.

It was 2001 when the new century began to mean a new WWJ. Its June 2001 issue debuted an updated look and a different approach to educating the professionals of the groundwater industry.

The decades-old masthead featuring a well stem in the two L’s of the word “Well” was gone and replaced by a cleaner looking name at the top of the magazine. Above the name was a new slogan: The Established Industry Leader.

The format of the publication was different as well with a series of feature articles in the front followed by the occasional directory and then a host of columns authored by industry experts.

Essentially it was in June 2001 that WWJ began taking on a look like what you are reading today.

Several popular columns began that year. That June issue debuted the long-running column titled The Well Guy by John Williamson, MGWC. It discussed issues Williamson had encountered at jobsites and how he had dealt with them. John L’Espoir also began his Transfer of Technology column in that issue. The column ran for 30 months and was then combined into a book that was a best seller for years.

A much longer running column made its debut in the October 2001 issue. In it, Ed Butts, PE, CPI, began his monthly Engineering Your Business column, which is still going strong today—click here for the 240th edition!

The July 2001 issue not only brought more new columns, but a new size. The issue that arrived in mailboxes was an 11 × 15 tabloid.

WWJ utilized the larger size for a number of years. From 2001-2003, the tabloid size was produced quarterly. However, it was the size used for every issue from 2004-2008. The traditional size came back for good in 2009.

Regardless of the sizes, the new century certainly had a new WWJ.