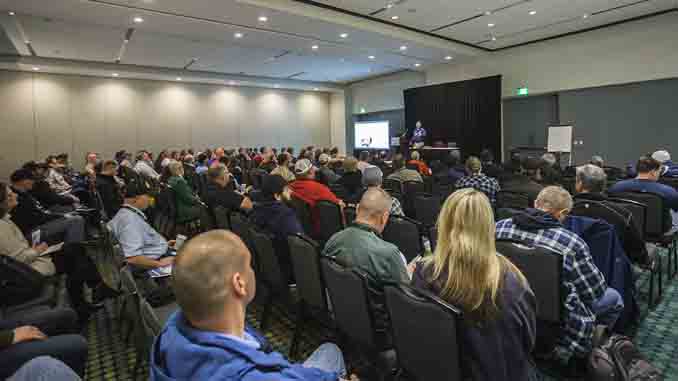 Networking opportunities abound for attendees and exhibitors at Groundwater Week 2017.

In today’s Google search, learn-it-on-YouTube era, face-to-face networking still has its place and continues to thrive in the groundwater industry.

This was evident during NGWA’s Groundwater Week 2017, where attendees and exhibitors shared their insights and experiences at the industry’s largest event. The exchange of information was in full swing during the hours of the convention and trade show and following it in the evenings.

Groundwater Week 2017 returned to Nashville’s Music City Center, where 4006 attendees made it the 20th most attended show. The 69th annual convention and trade show, held December 5-7, saw attendees hail from 36 countries, in addition to the United States. All sectors of the industry—water well system professionals, manufacturers, suppliers, and scientists and engineers—were represented.

For the first time NGWA’s technical conference, Groundwater Summit, took place alongside Groundwater Week as it ran December 4-7. The 13th Summit drew 325 attendees from 10 countries, in addition to the United States. Nashville’s Music City Center hosted Groundwater Week in its first year being open in 2013.

“I got to experience the energy and networking among our members and partners within the industry. The workshops were packed and the exhibit hall had great traffic. This was evident due to the large attendance. 2018 will be one of new beginnings—for me as well as NGWA—as we will work toward bringing our members more value.”

Succession planning continues to grow in importance with business owners considering the future of their companies. The workshop, “Leaving Your Business on Your Terms—Know Your Options,” by Tim McDaniel helped fill in the gaps for owners.

Cole Sullivan of Sullivan Water Wells in Chugiak, Alaska, recently took ownership of the company from his father, Bill, who had owned it since 1979. Bill, 65, took in McDaniel’s workshop as he reflected on what became a 10-year business transition phase.

“You could tell it was really bittersweet for him,” says the 33-year-old Cole, “but as far as the class goes, he thought it was excellent. It was really poignant for what he was going through. It was really nice because a lot of other guys are doing the same thing.”

As the industry continues to see the younger generation enter the industry, a familiar sight is seeing families attending the convention and trade show.

Cole attended with his wife, Ashely, and their two daughters, along with Cole’s assistant, Josh Brown, who attended workshops focused on pump service work. Cole has been to Groundwater Week the last 10 years.

“Networking is always good at the show, especially if you’re open to meeting new people,” he says. “I know regionally, too, Pacific Northwest drillers have similar conditions. It’s always nice to speak with them and see what they do locally.”

Many workshop panel discussions took place at Groundwater Week 2017, including one on the water well contractor-engineer working relationship. Titled “What Lies Beneath: Preventing Groundwater Challenges from Exerting Havoc on Your Projects” and moderated by Fred Rothauge, John Pitz, CPI, NGWAF, and Scott Honeyfield, the presentation was crafted to facilitate better communication between engineers and contractors while building on the knowledge and skills of each profession.

Tom Christopherson moderated a panel with industry veterans, “Excelling in the Groundwater Industry Panel: How the Professionals Rise to the Challenge.” Panelists shared their experiences on a variety of situations that tested their ingenuity, patience, and professional acumen.

Like 2016, Groundwater Week 2017 presented a workshop on new and revised federal tax issues. Brent Ardit, CPA, answered a variety of tax questions as attendees looked toward the incoming tax reform bill in the “2018 Federal Tax Update” workshop. All told, there were more than 10 business management workshops.

Nearly 10 workshops focused on well maintenance and rehabilitation—a subject continuing to evolve for water well system professionals. The importance of understanding how to test and treat for water quality was also covered in a variety of sessions.

On the show floor, exhibitors were busy forging new relationships or catching up with current customers at their booths. Some exhibitors noticed more networking taking place among water well system professionals in the Exhibit Hall than in years past.

It’s easy to see why. Over the course of two full days attendees got the chance to review the industry’s newest equipment and accessories and compare notes with each other.

A mainstay at Groundwater Week, drill rig manufacturer Laibe Corp./ Versa-Drill showcased its newest drilling rig along with its Mud Manager, a compact solids control system to operate off the hydraulics of the drilling rig unit.

First-time exhibitor VersaDrill Canada, a manufacturer of hydraulic geotechnical rigs, donned its GT8, which has been on the market for only one and a half years. Philippe Laplante, M.Sc., says the staff met many curious attendees.

“We’ve been in the northeastern United States,” Laplante says, “but we want to grow our market. We want to get out in other markets and I think this show has been really good for us. The first day (the Exhibit Hall was open) was quite amazing. There was a lot of interest.”

Helanbak LLC, also a first-time exhibitor and exhibitor sponsor, introduced itself to the industry. With a full-service, state-of-the-art fabrication shop, Helanbak custom-builds drill pipe, bits, and drilling accessories with a complete line of new, surplus, rerun, and retipped products.

The industry’s first application that standardizes the recording and reporting functions of well inspection was demonstrated on the show floor. The new BoreOptix software from Aries Industries Inc. helps to consistently collect and manage in-the-field inspection video and data.

Of the 25 first-time exhibitors, a handful of them were pump manufacturers, including Britefil S.A. Since 1975 it has manufactured stainless steel pumps and is headquartered in Algarve, Portugal. The firm is looking for a distributor in the United States as the product line is currently distributed in Europe, Africa, and the Middle East.

“A lot of people came by and were interested in seeing our product,” says engineer Antonio Brito. “Now that our name is out there, the first step is done. I’m glad we decided to come here. I think the future is bright for us.”

Latisha Shipman of Drill King International says attendees were interested in learning more about new technology and fielded many questions. The manufacturer of down-the-hole percussive hammers and bits brought its stabilizing shock sub and water-propelled hammer to display at their booth. Shipman says serious sales inquiries took place during the second day of the Exhibit Hall being open.

The NGWA Activity Areas located in the Exhibit Hall returned for the fourth consecutive year. They are designed so attendees can learn skills applicable to their job in a close setting ideal for interaction.

Caho, an industry veteran, visually noted the parts of equipment that should be inspected to ensure safe and efficient operation. The walk-through also pointed out those components that require regular attention to maintenance. Caho shared pearls of wisdom like enlisting someone new to lead a safety tailgate talk to help keep staff engaged. He was passionate about ensuring everyone understands the cost of complacency.

“Keep an open mind and listen—that’s how you learn,” Caho says. “It’s not just about continuing education credits

“This is your organization (NGWA). How you learn is by each other.”

Following the first day of the show, exhibitors and attendees alike mingled at the Franklin Electric Welcome Party. It is annually one of the most popular events to attend at Groundwater Week and again was jam-packed as friends new and old socialized.

A highlight of the show for many was hearing John Carter Cash, the only child from the marriage of Johnny Cash and June Carter Cash, deliver a presentation filled with classic music and stories about his family. The presentation took place during the Keynote Presentation and Awards of Excellence Ceremony.

It took Doug Hurley back in time. The owner/operator of Hurley’s Water Well Drilling in Frazeysburg, Ohio, grew up playing his father’s Johnny Cash records. Live country music at nearby restaurants and bars in Nashville was a treat as well for Doug and his family. The education, networking, and entertainment made it a worthwhile trip, particularly considering the company recently began using the rotary drilling method in 2017.

“The more you know, it can save you a lot of time and trouble. It’s not an expense (of going to the show) if it saves us time and problems down the road,” says the 58-year-old Hurley, who started the business in 1989. “It’s more expensive to have to re-drill or mess with the same hole for a long period of time than it is to know what to do in the first place.”

Doug’s son, Jordan, is the lead driller and was accompanied at the show by his wife, Candi, and their 13-month-old son. His list of questions on the mud rotary drilling application were answered at Groundwater Week. The Activity Area session titled “Understanding and Mixing Drilling Fluids” by Jeff Blinn of Halliburton/Baroid IDP was especially helpful. Jordan is planning on continuing his education by attending GEFCO’s Annual Drilling School in May.

“In my area, it’s difficult because our drilling goes everywhere from sand and gravel to rock to clay and drift,” says Jordan who turns 30 this year. “It’s just impossible to tell what you’re going to run into. I basically have to know every way to drill.”

Education on solar pumping options also made an impact on Jordan. He commonly works with low-yielding wells far from homes. Installing a solar pump could be more cost-effective for customers rather than running electric to where the pump is located.

“We’re in the hilly part of Ohio, and up in the hills you can get decent sunlight,” Jordan says, “and usually the hills are where you have the hardest time finding water.” 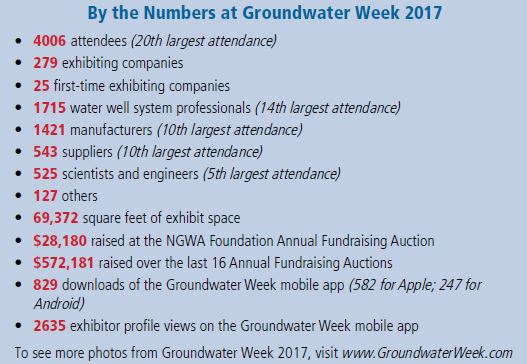 Traut, MGWC, CVCLD, were elected to the NGWA Board of Directors. Casarez, Snelten, and Traut were elected to their second terms as NGWA directors, while this marks Layman’s first term. There were 281 delegates in attendance, nearly 100 more than the 2013 Nashville show and 31 more than in 2016.

Outgoing NGWA President Todd Hunter, CWD/PI, designated time to acknowledge NGWA CEO Kevin McCray, CAE, who retired at the end of 2017 after 22 years as CEO and more than 35 years of employment at the Association. Multiple standing ovations were given for McCray’s service to NGWA during the Delegates Meeting.

McCray gave his final remarks as CEO of NGWA, praising his staff and volunteers before thanking his family, who were in attendance. Past NGWA presidents and board members who served with McCray made sure they were in attendance to see McCray at his last show.

David Henrich, CWD/PI, CVCLD, became the new NGWA president, receiving the gavel from Hunter. Henrich says he looks forward to working alongside Morse and the four membership sections in 2018.

The NGWA Awards of Excellence were again inspiring. Among the recipients was NGWA Past President Richard Thron, MGWC, who received the Robert Storm Intersectional Cooperation Award. Thron gave an emotional speech, sharing his personal journey and thanking the industry in helping him along the way. Past McEllhiney Lecturer John Schnieders, Ph.D., received the Ross L. Oliver Award, presented to a member who has made outstanding contributions to the groundwater industry.

Attendees took part in a morning networking session over coffee with the NGWA Board of Directors and Morse on the last day of the show.

Mike Price is the senior editor of Water Well Journal. In addition to his WWJ responsibilities, Price produces NGWA’s newsletter and contributes to the Association’s quarterly scientific publication. He can be reached at mprice@ngwa.org.