WWJ began looking a lot more like the publication you know in year 11.

Hitting its stride, finding its groove, or rolling right along—whatever the term, it’s safe to say 1957 is the year Water Well Journal began doing it.

WWJ debuted in 1947 as a bi-monthly publication but began being delivered each month in 1956 with volume 10. It paid off as advertising climbed significantly in 1957, resulting in fatter issues arriving in
mailboxes. The circulation also climbed, as the journal was mailed to more than 10,600 groundwater professionals all around the world. 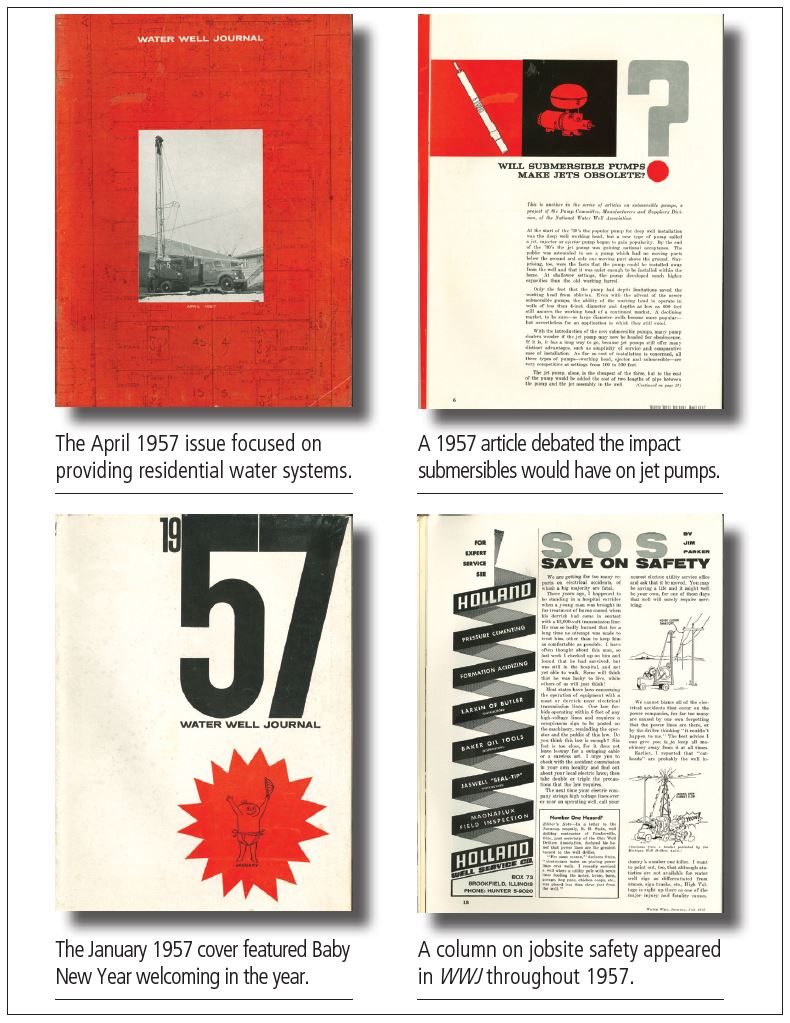 And the stockholders got paid in 1957! The Water Well Journal Publishing
Co. was established in 1949 as many contractors, manufacturers, suppliers,
National Ground Water Association members, and state associations bought stock to support the publication, knowing doing so would lead to the long-term betterment of the industry.

Those loyalists were finally rewarded with dividends in 1957. See what I mean? Truly hitting your stride!

The magazine featured columns like you see today. Pipelines from Washington continued to appear in each issue. Authored by Carl F. Hawver, it detailed a variety of happenings in Washington, D.C., that could impact the groundwater industry. Memos from Smitty by Harmon F. Smith, an engineer  with the Illinois State Water Survey, appeared in every other issue, covering a variety of technical topics.

Save on Safety by Jim Parker began appearing in 1957, stressing the importance of safe work habits on the jobsite. The July installment discussed looking out for overhead power lines and began with the
powerful story of Parker seeing a contractor in a hospital whose derrick had come in contact with a 12,000-volt transmission line. While the contractor lived, Parker found out he could no longer walk when he checked up on him three years later.

Like the WWJ of today, industry news, an events calendar, and a list of new products were in every issue. An index of advertisers was even in the back of the magazine. Looking through the advertisers’ names in those old issues is fun as you see long-lost companies of years gone by but others still serving the industry today.

Many of the feature articles in 1957 focused on submersible pumps, which became a source of content two years earlier. How to properly install, protecting the pumps, electrical tests, lengthening pump life, and selling submersible pump systems were all discussed.

The April 1957 issue marked the third time WWJ had dedicated its focus to water systems. Our annual publication focusing on pumps is next month. We’re still right there in stride with what was set decades ago!