A series of choices brought a Superfund site back to life—and won an NGWA outstanding groundwater remediation project award.

At times, the news can feel filled with stories of corporations cutting corners to turn a larger profit or companies skirting safety regulations at the expense of your health and the environment. After a lifetime of hearing such stories, your faith in people and institutions can become jaded and your hope for the future can wane.

But occasionally, you hear a story about a group of people who come together and make good decisions. Smart decisions. Decisions with an eye towards the future and not the right now. And dare I say, decisions that are driven by a true desire to do good for a community and not by bottom-line thinking.

It’s nice to have these people and organizations recognized. So, what follows is the story of how a group of people came together to bring a piece of land outside a small New Hampshire town back to life—and how this group’s work, along with that of their shareholders and the community, led them to being awarded the National Ground Water Association Outstanding Groundwater Remediation Project Award for 2021.

Something in the Air

There was something in the air in the early 90’s in Plaistow, New Hampshire.

Plaistow had once been the home of the Beede Waste Oil Recycling Facility, which operated as an oil recycling facility from the 1920s until 1994. Towards the end of the facility’s operation, it was also used for asphalt batching which led to a concerning odor being emitted that its neighbors found less than desirable.

After an investigation, state regulators discovered that due to poor waste handling of oil at the site, chlorinated and aromatic volatile organic compounds (VOCs) from old oil storage containers had leaked and seeped into the soil and then made their ways to the water table.

This investigation would also find that VOC impacts in the site’s groundwater led to the contamination of private water wells surrounding the former facility.

Soon after this discovery in 1994, the state of New Hampshire ordered the Beede Waste Oil Recycling Facility to be cleaned up and the site was officially declared a “Superfund site” by the U.S. Environmental Protection Agency in 1996.

In the coming years, the EPA would work with state and local agencies to determine a strategy to clean up the site, and by 2004, the remedy plan was finalized.

Because the former owners of the site did not have the capacity to finance the cleanup, the EPA turned to former customers to fund its remediation. So, a group of prior facility customers came together and formed the Beede Site Group (BSG), and under a consent decree were made responsible for the site’s future. BSG then hired Woodard & Curran as their primary contractor to oversee planning and implementation of the site remedy. 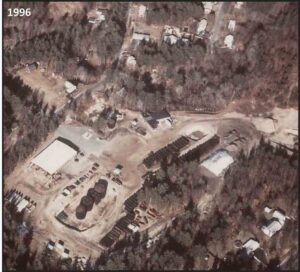 Woodard & Curran is a national environmental engineering and consulting firm with more than 1200 employees and 27 locations across the United States.

BSG and Woodard & Curran immediately went to work putting together strategies to ensure that homes with contaminated wells were able to access clean water and creating a community outreach campaign to keep residents informed on progress and safety information.

The initial plan to tackle groundwater cleanup first called for source area treatment by extracting the oil from the aquifer with thermal enhancements. This process involves heating the ground, which then allows for easier removal of contaminants from the soil and groundwater. Then, once that process was completed, the group would construct a groundwater treatment plant on-site to pump and treat the contaminated groundwater.

This was a reasonable strategy for the site, and one that is implemented often in this type of situation. But you don’t become an NGWA award winner by always thinking inside the box.

The last part may seem like a small thing, but it would go on to save millions of gallons of water from having to be hauled to the worksite and drastically reduce the carbon footprint of the project.

Of course, good ideas die on paper if not presented to partners willing to consider them. So, while this idea is praiseworthy alone for its creativity and ingenuity, it’s important to remember it wouldn’t have happened without a team willing to listen and collaborate.

“We viewed it as an opportunity to help address the potential threat of groundwater contamination off property, prevent future risk, and provide a much-needed water source on the jobsite,” says Cathy Rockwell, PE, and senior technical manager at Woodard & Curran. “And we were lucky to have a team who saw the benefits of this new vision and were able to add new ideas to get it done.”

As work on the site continued, more emerging contaminants were discovered in the groundwater. One was 1,4-Dioxane, which is a synthetic industrial chemical that’s primary use was a stabilizer for chlorinated solvents. High doses of 1,4 Dioxane cause liver and kidney damage and is classified by the EPA as “likely to be carcinogenic to humans.”

At the time of its discovery, the levels of 1,4-Dioxane onsite were close to, but not exceeding, what was legally within safe levels for drinking water. But Woodard & Curran and the BSG also knew the current levels were under consideration by the state of New Hampshire and were potentially going to be lowered. It was unknown at the time if the current levels of 1,4-Dioxane on-site would meet a new standard if it was put in place.

At this crossroad, it’s easy to imagine many organizations taking the easy road and choosing not to remediate the 1,4- Dioxane because there was not a regulatory reason to do so. Plus, it would cost more money, take more time, and there was no guarantee the state would implement a stricter standard.

But you don’t become an NGWA award winner by taking the easy way out.

After reviewing the situation, and the potential for future requirements to re-extract and treat groundwater to a stricter standard, Woodard & Curran and the BSG decided to address the contamination issue head-on before they were under any legal obligation to do so.

This meant a larger investment into their groundwater system, more time for design, and more man-hours needed on the project. But it also meant the water would be cleaner, and the overall health of the groundwater aquifer and the community would be improved.

Taking It to the Streets

There is a saying in politics that a rumor is like wet cement: If it goes undisturbed too long, it hardens into the truth. And anyone who grew up in a small town can tell you their rumor mills produce a steady stream of wet cement.

So given a topic that is already as frightening as water pollution, things can get out of hand quickly without a smart community outreach strategy.

Woodard & Curran and the BSG understood the people of Plaistow had every reason to be scared, upset, and deserving of answers. They also knew a public affairs strategy of constant communication, transparency, and community engagement would help quell misinformation from needlessly scaring the population and provide the town with the information they deserved.

An outreach plan was put into place and Woodard & Curran and the BSG quickly became fixtures within the community. They put together open houses, tours of their water plant, created online and social media resources, and found countless ways to support local contractors and businesses. They even used the site cleanup as an opportunity to support STEM education with local high schools.

“Keeping the residents informed on the issues and our remediation process was very important,” Woodard & Curran’s Rockwell says. “But using the situation as an opportunity to educate students about STEM and biology is one of the things we’re most proud of. We view it as another way our work on the site will live on for years to come.”

A major focus of site rehabilitation was to maintain baseflow to the nearby brook which had been identified as a national wildlife corridor. As part of these efforts, major conservation work was done on the project not just to maintain and protect the land, but to rehabilitate and foster new habitats for wildlife in the area.

While the success of this work can often be seen on the various game cameras which have been installed on the site, it can also be seen by simply visiting the site.

“It’s an amazing thing to see, knowing what this site once was and now seeing wildlife not just passing through but they’re living and thriving here,” Rockwell says. “It really puts into perspective what we’ve been working on all this time.”

The Beede site project started almost 30 years ago and throughout that time hundreds of decisions were made to shape the future of its environment and the surrounding communities.

But what ultimately makes this story worth sharing, and the project worthy of the 2021 Outstanding Groundwater Remediation Award, is that so many of those decisions were the right ones. They were decisions made collaboratively, compassionately, and with a sincere focus on wanting to do good.

Do you know an individual or organization that makes the right decision—a person who makes our industry stronger and our world a better place to live? If so, nominate them for an NGWA award recognizing the best of the industry.

The call for nominations for 2022 NGWA awards is now open with submissions due to NGWA by June 1, 2022. The award presentations will be made during Groundwater Week 2022 in December in Las Vegas, Nevada. Learn more at www.NGWA.org/Awards.

Ben Frech is the public affairs and regional public policy manager for the National Ground Water Association. He can be reached at
bfrech@ngwa.org.