The convention coverage has changed through the years, but WWJ has always been at the industry’s leading event.

The name of the association has changed once and the name of the conference has changed on multiple occasions, but one constant has been Water Well Journal. The leading publication of the groundwater industry has always covered extensively the largest annual show in the industry. 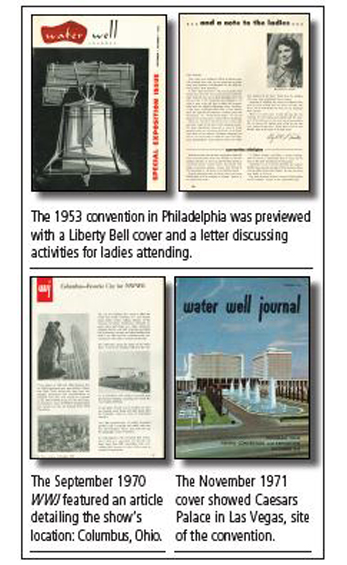 This issue previews Groundwater Week 2021, which takes place December 14-16 in Nashville, Tennessee. With that, it seems like the perfect time to revisit how WWJ has promoted the show in years gone by.

For years, it was the National Water Well Association’s Exposition that received coverage. The NWWA became the National Ground Water Association in 1991 and NGWA eventually was hosting the Groundwater Expo. More recently, Groundwater Week has been the moniker.

The times have changed and the WWJ coverage has changed with it. In the early days, a welcome letter from the NWWA president and the schedule was often accompanied by comments from the president’s wife promoting a program “for the ladies.” In some issues, a full article was often written about the president’s wife, who yes, was referred to as NWWA’s first lady.

Perhaps the biggest change from the older issues to the present is the coverage of when the workshops and exhibits are closed. For years, there were always articles about the host city with suggestions on what to do in the evening or before or after the conference.

The 1970 NWWA exposition was in Columbus, Ohio, and the August issue previewed the event. Included was “Columbus—Favorite City for NWWE,” an article that pointed out the number of city parks, golf courses, and fishing and boating opportunities.

Side note: The event that year was at the Veteran’s Memorial Auditorium, which no longer exists. It was replaced by the National Veterans Memorial and Museum in 2018. The world-class facility is a must-see for anyone who comes to central Ohio, is a veteran, or has veterans in their family.

Back to WWJ’s convention coverage: The covers of those early WWJ issues usually depicted an important landmark in the city—a drawing of the Liberty Bell promoted the convention on the September-October 1953 cover and photos of the St. Louis Arch and New Orleans’ French Quarter have also graced WWJ covers. The other popular cover subject for years was conference hotels. There’s been lots and lots of hotel cover shots!

The November 1971 WWJ cover showed Caesars Palace as that was the site of that year’s NWWA convention. Anyone who has been to the absolutely gigantic, city block-sized Caesars in recent years will hardly recognize the almost quaint two hotel towers that dot the 1971 cover.

I began at WWJ in 2000 and wrote about things to do in Las Vegas that year for the preview that ran in the October issue—complete with a cover showing the colorful neon of the Paris Las Vegas casino at night. I wrote about heading to Hoover Dam and Lake Mead—just as they did in that 1971 issue.

The preview articles in recent years have not discussed restaurants, nightlife, or the number of city parks. The covers have not depicted landmarks or hotels. That’s been a conscious decision of mine and I think for a good reason.

WWJ is a trade magazine for groundwater professionals, so the preview article for Groundwater Week 2021 discusses what is happening in the convention center and details all the educational opportunities, not just the names of the sessions, but what the workshops will actually cover.

The cover images in recent years have also focused exclusively on the show. This year’s cover shows the Exhibit Hall in 2017, the last time Groundwater Week was in Nashville.

The focus may be slightly different now, but it’s still the same great coverage decades later.