Aquifer categories can be used to identify, classify, and extrapolate hydrogeologic information from one location to another. This column provides a brief discussion of each aquifer type and supplements the description using figures and photographs on occasion.

As the discussion progresses from unconsolidated geologic materials (sand or gravel units for example) to consolidated/cemented geologic materials (rock for example), the porosity and hydraulic conductivity of a material are governed by secondary openings in the rock, such as joints or fractures. Wide ranges in hydraulic properties (porosity and hydraulic conductivity) exist for each type of aquifer, and the hydraulic characteristics typical of different regions of the United States that represent these aquifer types are provided in Table 1. It is important to remember these aquifer types also are found in other areas of the world.

Aquifer categories can be used to identify, classify, and extrapolate hydrogeologic information from one location to another.

This column is based on an appendix that appeared in Groundwater & Wells, Third Edition. It is co-authored by my good friend and mentor, Bob Sterrett. Enjoy the trip through the aquifers of North America. 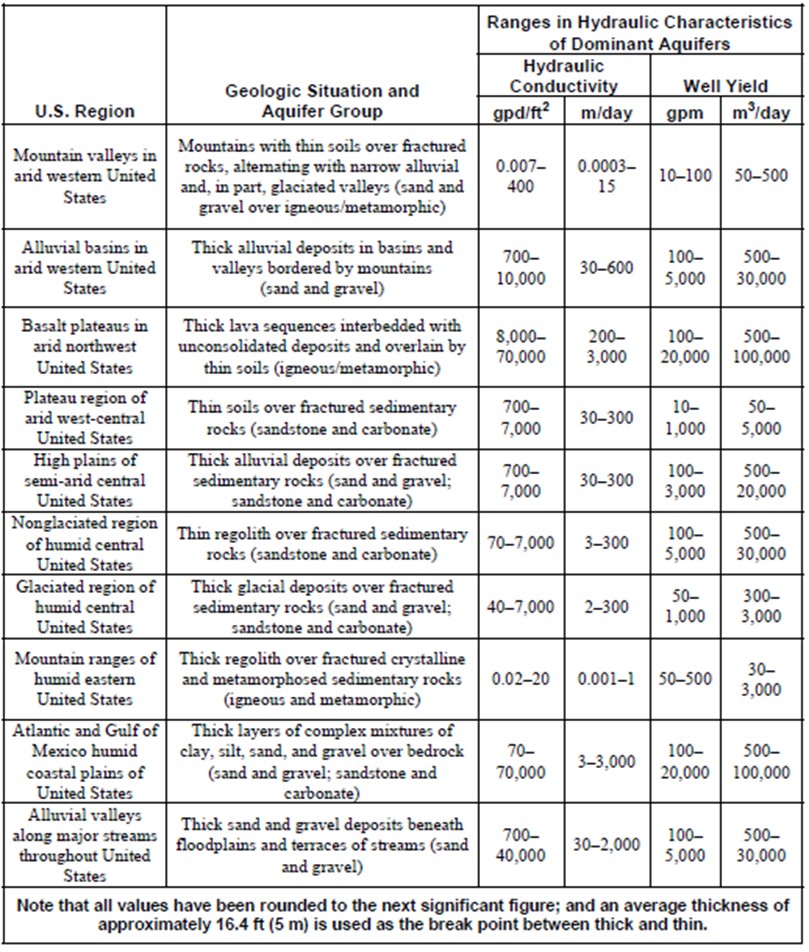 The U.S. Geological Survey (USGS) has categorized the principal water-yielding aquifers of North America into five groups. The information presented in this column is derived primarily from a section of the USGS’s website titled “Principal Aquifers of the United States” (www.usgs.gov). The five groups of aquifers classified by the USGS are:

As discussed in Table 1, these aquifer groups are not unique to North America, and the classification or grouping system can be extrapolated (with modifications) to other areas of the world.

Most of the important unconsolidated and semi-consolidated aquifers were deposited by rivers and streams transporting and depositing sediments in relation to the energy of the stream. The amount of energy contained within a fluvial system during deposition is a function of the velocity and volume of flow.

The flow regimes within a stream are highly variable—ranging from laminar to turbulent—and these variations lead to the deposition of a wide variety of sediment types and sizes. Stream (alluvial) systems commonly have gravels deposited adjacent to silts and clays because the stream channel has migrated over time.

Basin-fill aquifers are located in areas that have significant topographic relief where materials from adjacent mountains were eroded, transported, and deposited in valleys adjacent to the mountains.

In the western United States, these basin-fill deposits are found in the Basin and Range Province (an area extending from Nevada to the western portion of Utah and into Arizona and southeastern California). The basin commonly is contained between two mountain ranges that are bounded by faults (Figure 1).

Quite often these basin-fill aquifers are bounded by less-permeable bedrock aquifers. As noted in Figure 1, the basins are formed by horst and graben structures, where a horst is an upthrown block of rock and a graben is a downthrown block and the sediments are primarily derived from the adjacent bedrock.

Fine-grained deposits of silt and clay that act as confining layers can be interbedded with sand and gravel between the center and edges of the basin, depending on the rate of basin subsidence in relation to the rise of the adjacent mountains. In basins that contain thick sedimentary sequences, the sediments become increasingly more compacted and less permeable with depth. Figure 2 is a block diagram of closed and open basins.

In the centers of alluvial basins, lakes or playas may exist because the valley bottom is a groundwater discharge area, or they could be remnants of glacial lakes that occurred from the greater precipitation that occurred during the Pleistocene age. Due to relatively high evaporation rates relative to precipitation, the basins may have deposits of salt, anhydrite, gypsum, or borate. These minerals are produced by evaporation of mineralized groundwater and surface water.

Two types of hydrologic settings are most common in alluvial basins. One type is a closed system where surface water does not exit the basin and all inflow to the basin evaporates. A second type is an open basin where the streams or groundwater exit the basin.

Valley-fill alluvial aquifers typically are shallow aquifers that are adjacent to and beneath streams and rivers. A diagram of the lower Mississippi River Valley is shown in Figure 3.

The degree of material sorting occurring in a particular stratum is dependent on the energy of the river. Coarser-grained sediments generally are interbedded with finer-grained materials, resulting in complex mixtures of sediment grain sizes. In many cases, continental glaciation has influenced the size of the alluvial valley; increased water flows during glaciation eroded the valley walls and thus enlarged the valley. When the meltwaters ceased, a valley much larger than could be formed by the current stream system occurred in the valley.

Within these large valleys the streams meander, resulting in complex depositional patterns where coarse- and fine-grained sediments are interbedded. Valley-fill aquifers generally are unconfined to semi-confined and are hydraulically connected to the associated stream or river. Given their location in river valleys, these aquifers can be in local to regional groundwater, discharge areas from the greater valleys they occupy.

Blanket sand and gravel aquifers typically consist of alluvial deposits that result from the erosion of adjacent uplands and can extend great distances from their respective source areas. These aquifers can range from relatively thin deposits to thick deposits such as the High Plains Aquifer (Ogallala Formation) (Figure 4) that is located in the west-central portion of the United States.

Blanket sand and gravel aquifers generally are unconfined at shallow depth but can be locally confined where they contain silt and clay deposits. Because many of these aquifers are shallow, they respond seasonally to changes in precipitation and to pumping stresses. It should be noted that the Ogallala Formation is highly heterogenous and that the eastern portions of the formation are fine grained.

Coastal-plain aquifers are formed adjacent to the oceans where sediments from bordering highlands are deposited as alluvial deposits on land and in shallow marine environments. Sediments primarily consist of semi-consolidated sand, silt, and clay, interbedded with some carbonate rocks.

Coarser-grained materials, such as gravels and coarse sands, generally are deposited near sediment source areas and the amounts of silt and clay in a deposit increases near the coast. Coastal-plain aquifers generally form thick wedges of sediment that dip and thicken seaward. The coastal Florida aquifer system, where an unconfined surficial aquifer system of sediment and carbonate rocks overlie a thick confining unit, is shown in Figure 5.

Complex interbedding and variations in lithology are found in coastal-plain aquifers as a result of varying depositional environments induced by changing sea levels. Some aquifers are thick and continuous for hundreds of miles, others are local in extent.

As is the case in some regional aquifers. direct precipitation on outcrops and streams that cross the outcrops are the sources of recharge to coastal-plain aquifers. Recharge moves downgradient and down-dip in the aquifers toward the coasts. As shown in Figure 5, groundwater becomes confined beneath the clay, silt, and shale beds of younger formations that overlie the deeper aquifers.

Glacial deposits cover approximately 8% of the earth’s surface and significant portions of the Northern Hemisphere (more than 25%) and can vary in thickness from thin veneers a few feet thick to more than hundreds of feet thick.

These types of deposits can be complex from a depositional perspective and sediments types can vary significantly within short lateral and vertical distances. This high variability is due to fluvial-ice interactions and depositional processes occurring beneath, within, on top of, or adjacent to the ice sheet (Figure 6).

As the ice melts at the front of the glacier, coarse-grained sand and gravel outwash sediments are deposited. Meltwaters form streams that create fluvial deposits similar to valley-fill aquifers. Often regional aquifers are formed in bedrock valleys or are in sheet-like deposits on outwash plains.

Thick deposits of clay, silt, and fine sand accumulate in lakes that are in front of the glacier, which can act as local confining units where they overlay sand and gravel beds. A buried stream valley covered by glacial till is shown in Figure 7.

Large glacial-deposit aquifers can be buried beneath till, glacial-lake deposits, or shallower sand and gravel aquifers. During ice advances, glacial till often is deposited on top of the glacial-deposit aquifers of the previous ice-age event. Glacial tills are geologic materials that are deposited directly by a glacier without re-working by meltwater. Tills consist of mixtures of clay, silt, sand, gravel, and boulders ranging widely in size and shape. Due to their fine-grained nature, the tills deposited by continental glaciers generally are not considered to be significant sources of groundwater.

Aquifers in the sand and gravel of glacial outwash plains typically are exposed at the land surface and receive direct recharge from precipitation. Water in the upper portions of these aquifers discharges to local streams, lakes, or wetlands. Water in the deeper parts of the aquifers generally discharges to intermediate or regional groundwater discharge area, depending on the relative topography of the area.

That is a quick journey through the alluvial aquifers of North America. The aquifers can be more complex than this general overview provides but hopefully it is interesting and helpful in well construction and hydrogeologic investigations. In the next column we will look at the bedrock aquifers.

Get the Top-Selling Reference Book in the Groundwater Industry
Groundwater & Wells, Third Edition, is the top-selling reference book year after year. This tremendous resource should be on your desk if you are serious about the groundwater

It features 20 years of advancements in technology and knowledge gained in the field. Included are new borehole geophysical techniques, information on underbalanced and horizontal drilling, new approaches to well development, as well as details on ASR, groundwater monitoring and remediation, prepack screens for water interactive well design and well maintenance programs for water well contractors and design engineers. 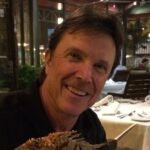 Thomas M. Hanna, PG, is a technical director of water well products/hydrogeologist for Johnson Screens where he works in areas of well design, development, and well rehabilitation. He is a registered professional geologist in Arizona, Kentucky, and Wyoming and has worked for several groundwater consulting firms. Hanna can be reached at thom.hanna@johnsonscreens.com.

Bob Sterrett, Ph.D., is the principal hydrogeologist for RJS Consulting Inc. in Golden, Colorado. He has more than 30 years of experience in the fields of hydrogeology and engineering geology. He was the technical editor and a contributor to Groundwater & Wells, Third Edition, and was awarded the NGWA Special Recognition Award in 2021.