The geothermal energy systems are heating up in the Netherlands. 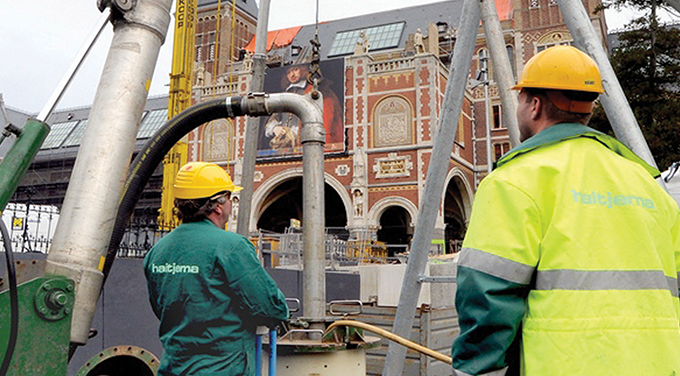 A traditional geothermal system—as we use it in the United States—takes advantage of groundwater’s stable temperature to provide warmth in the winter and cooling in the summer. But what if the water in an aquifer could be used to store energy rather than extracting energy from it?

While it’s common in Europe, mostly in the Netherlands and Scandinavia, it’s rarely used in the United States because our aquifers are less suitable for the technology. The sand aquifers in the Netherlands are better for ATES and each well can typically produce up to 250 cubic meters per hour (m3/h) or 1100 gallons per minute (gpm), says Ronald Folders, director for Grondboorbedrijf Haitjema B.V. in Dedemsvaart, Netherlands. 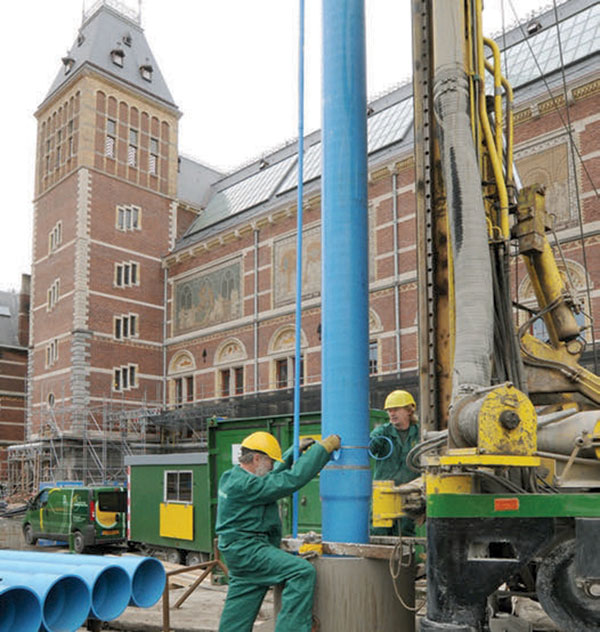 “You need gravel that’s not too big or too small with water in between that we can pump around during the season,” he says. “It’s not as possible in rock or something like that where you have underlayers.”

The ATES Research Lab at Richard Stockton College in New Jersey is a domestic project and was the first commer- cial-scale system completed in the United States. The system, completed in 2009, is used only for cooling. The research lab is located on the Cohansey aquifer, which moves slowly enough for them to recover up to 90% of energy stored in the aquifer.

Haitjema, as one of the leading Dutch companies using this technology, shared its expertise with the U.S.-based contractor that installed the system and provided equipment and other support for the project.

The ground in the Netherlands keeps the wells at a fairly stable temperature. There’s only one degree lost during the seasons. If the water is injected into the well at about 62°, it can be pumped out six months later at about 61°.

Energy prices are higher in Europe than in the United States, which has forced many to look at green technologies like ATES, especially when constructing new buildings or renovating existing structures. Windmills and other renewable energy solutions are used outside of cities, but the smaller footprint of ATES systems makes them more attractive for larger office buildings, schools, and universities where space is limited.

Most of the systems use just two wells, but they can be larger if needed. For a data center that uses a lot of energy to keep computers cool, for example, a system may need up to six or more wells, three cold wells and three warm wells.

Not only are the systems energy efficient—saving up to 30% in energy costs—they also have a quick payback. In some estimates, the systems can pay for themselves in about five years. They also have a long lifespan, as some have been in place for more than 20 years.

Haitjema was founded prior to 1900 by Marten Haitjema— who is the great-grandfather of Henk Haitjema, Ph.D., the current editor-in-chief of the National Ground Water Asso- ciation’s scientific journal, Groundwater. The company has provided groundwater supply wells for more than a century in the Netherlands and internationally.

Since its first ATES system in 1987, it has gone on to become about 50% of the company’s business, including installation and yearly maintenance. It also provides instal- lation and service on residential water wells for homes and industrial wells for businesses, including large breweries and paper factories.

In 2011, Haitjema started construction on an ATES system for the Stedelijk Museum, a modern and contemporary art museum located in Amsterdam. The system was added during a complete renovation and addition to the more than 100-year- old building.

The new 98,400-square-foot building was reoriented so the museum could face the public lawn of Amsterdam’s Museum Plaza, creating a common area with other nearby museums: the Rijksmuseum, the Van Gogh Museum, and the Concertge- bouw. Among galleries, the building also houses a restaurant, museum shop, and library.

Historical buildings like those in the Netherlands and in the United States present challenges when designing any new heating and cooling system. An efficient green system is im- portant because many exterior features, such as old windows, can’t be upgraded to more energy-efficient options.

“It’s not possible, in that crowded area, to put the equip- ment on the roof or in the garden,” Folders says. “They make noise and are not so very good looking.”

So, an underground system like ATES is often preferred for historic buildings. Nothing is visible from the exterior, inside the building there only needs to be space for the heat exchanger and a couple of manhole covers outside.

The Stedelijk Museum’s system is composed of two wells drilled approximately 500 feet deep and 28 inches in diameter. Each well has a variable speed submersible pump capable of pumping up to 220 m3/h (958 gpm). Each well can produce up to 1400 megawatts per hour (MWh), saving nearly 150 tons of CO2 each year.

In 2013, the neighboring Rijksmuseum completed its ren- ovation that included an ATES system installed by Haitjema. Rijksmuseum houses more than 80 galleries with 8000 arti- facts of Dutch history and art from the medieval ages to the 20th century.

“The (installation) took place during the complete renovation of the Rijksmuseum,” Folders says. “So, we had to (work) with the other contractors on a strict deadline.” 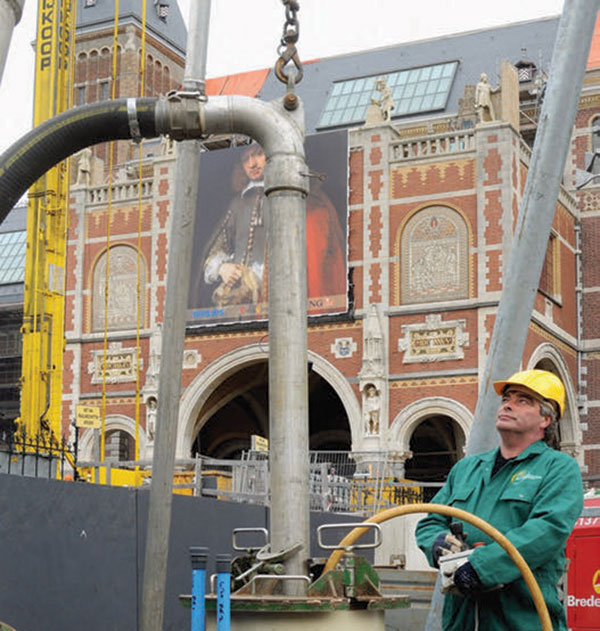 Like the nearby Stedelijk Museum, Rijksmuseum uses two wells, a cold well and a warm well, drilled about 500 feet deep with a 28-inch diameter. Each well also has a variable speed submersible pump capable of pumping up to 200 m3/h, or about 880 gpm. Each well can produce about 1850 MWh, saving about 200 tons of CO2 per year.

Haitjema also added an ATES system to a third museum in Museum Plaza: the Van Gogh Museum. The museum, which opened in 1973, is dedicated to the life and art of Vincent van Gogh, the influential Dutch Post-Impressionist painter of the 19th century.

The system for the Van Gogh Museum presented a different challenge: there wasn’t enough space for two wells.

“Because of the systems at Stedelijk Museum and Rijksmuseum, there was only one position possible,” Folders says. “So, we had to choose a mono well.”

At 33,368 square feet, the museum was also smaller than the other two projects and didn’t require the same amount of heating and cooling. To make the system work for the museum, Haitjema drilled a single borehole with two wells on top of each other. The cold well is the deepest well, with the warm well above it. Unlike the other two museums, each well is only capable of producing 55 m3/h (242 gpm).

ATES systems are popular in museums because they do a good job of keeping the climate stable in the building, which is good for the collections and visitors. During cold days they need heat in the nighttime but cooling in the daytime when there are thousands of visitors in the museum.

The buildings need cooling all the time in the summer. This can actually be a disadvantage to an ATES system, according to Folders. To be the most efficient, and meet Dutch regulations, the system needs to be in balance.

Although Folders says the systems are relatively cheap to install in the Netherlands, the installations take a lot of time and space. There needs to be enough room to bring in the drilling rigs, and the process is noisy and disruptive.

Despite the drawbacks, Folders anticipates the demand for ATES systems will continue to grow in years to come as a proven and valuable technique. Through the Netherlands’ energy policy, the country is urging businesses and homeowners to reduce their dependence on natural gas—which is used for heating and cooling in 98% of the country.

“(ATES systems) are very important to our company,” Folders says. “More and more, ATES systems are a part of our future.”