A lot happened for water policy in 2022 in our nation’s capital.

Every year around this time I find myself wondering, “What a busy and hectic year for politics and water policy; could next year really be any crazier?” I guess since I ask myself that every year, I have my answer. 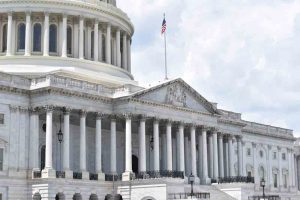 However, 2022 was an exceptionally eventful year for water policy across the United States. Just consider:

We saw bills like the Infrastructure Investment and Jobs Act and the Inflation Reduction Act invest billions of dollars into public water infrastructure and PFAS remediation. We saw the U.S. Environmental Protection Agency ratchet up its regulations surrounding water and fuel emissions. And of course, many states continued to search for new options and funding sources to fight the impact of long-term drought and aquifer depletion.

The year also proved to be especially productive for some long-time legislative priorities of the National Ground Water Association. Most geothermal tax credits, which were set to expire in 2023, were extended until 2030. PFAS regulations continued to move forward towards the Association’s goal of a national PFAS drinking water standard. And we drafted the first of its kind managed aquifer recharge study to be included in the Water Resources Development Act and helped lobby for the largest investment in water reuse and recycling in our nation’s history.

NGWA also formally requested an exemption for Class B drilling rigs from the new FMCSA Entry Level Driving requirements and began lobbying for a new grant program to provide POE and POU remediation systems for rural well owners. Both issues will be top priorities in 2023.

Even though many people viewed 2022 as an overwhelming success for the water industry—and in many ways it was—for those in the water well contracting business there were still plenty of challenges.

By all accounts business was good and our membership was as busy as ever. But the job itself became more expensive and stressful. Fuel price increases, labor shortages, supply chain issues, and increasing regulations—all brought their own problems and headaches to an industry that is never without its fair share of problems and headaches.

Because it was not just the water well contractors and construction industries facing these economic issues but also most American families, it was long expected that the Joe Biden administration and Democrats in Washington, D.C., would pay the price at the polls during the midterm election. At various times in October, in fact, it seemed all but certain the Republicans would pick up control in the Senate and House of Representatives with a healthy margin of victory.

But the red wave never actually came. The Democrats kept control of the Senate and Republicans won the House with a much smaller margin than previously expected. I’m not going to put my campaign strategist hat on and discuss why the red wave never fully came, but simply ask this important question: What’s next and how will it impact the world of groundwater?

First and foremost, it will likely slow down the barrage of federal spending we have seen in the last year. Democrats knew they had a two-year window to advance their agenda and they did it well. But now, with Republicans controlling the House, it will all but certainly become a choke point for anything the Biden administration and the Senate want to push through.

While I expect this check on power to slow down the legislative process, especially from the last two years, I do not anticipate an all-out freeze of federal legislation.

For example, the Farm Bill which funds the U.S. Department of Agriculture is due to pass in 2023, and while I expect it to be a fight, I think it will ultimately make its way to the President’s desk. The agriculture industry and industries it helps support, like the water well industry, are simply too large and important to our economy to let it lapse.

Finally, I predict there will be no big changes to how the Biden administration does business or to their agenda. Typically in the years after a midterm election, the President in power does a course correction after hearing loudly from the American people that they want a change.

But in this case, the message from the American people was murky at best. While Biden’s approval ratings are still low, and the voters are still not confident in the economy, they didn’t necessarily channel that anger into an electoral blowout.

I’ve learned to never bet real money on what’s going to happen in Washington, D.C., because the game has gotten too weird and unpredictable. But if I were to bet on one thing, it would be that this time next year, I’ll be thinking to myself, “What a crazy year!”

Make Plans to Attend 2023 NGWA Smart Water Policies Fly-In
The 2023 NGWA Smart Water Policies Fly-In returns to Washington, D.C., and will take place March 22-23. The Fly-In, which was held virtually for the first time in 2022, is back in-person and will focus on the Farm Bill, Healthy H20 Act, CDL exemptions, and more. NGWA and the Water Quality Association will host policy seminars during the two-day event. Click here for more information.

Ben Frech is the public affairs and regional public policy manager for the National Ground Water Association. He can be reached at
bfrech@ngwa.org.