2M Co. announced that Dan Ruff, the company’s senior salesman and product manager, retired on May 28 after 43 years with the company. Ruff joined 2M on the company’s opening day, June 1, 1978. 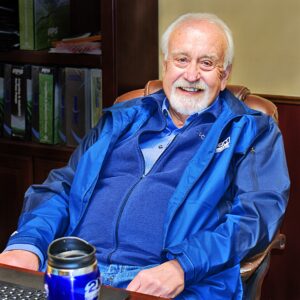 Prior to joining 2M, Ruff had worked in sales for a large distributor specializing in turf irrigation, pump supplies, and water well equipment. That’s where he met his then supervisor, Bill Mills. When Mills decided to branch out and start his own business he asked Ruff to join him.

“I asked him to join us because I liked him and I trusted him,” Mills says. “He knew the customers, he knew the product lines, and he knew the area. Dan was very outgoing, pleasant, funny, and always joking about something. He was exactly what we needed.”

“I left a high-paying job and a new company car for a third of the wages and a four-year-old beat-up van,” Ruff says, laughing. But he knew it was the right move. “I trusted Bill. He had the right vision.”

When 2M opened for business, they set out to provide the best service in the industry. They installed the first 800-number in the pump industry, so that customers could call in toll-free any time of day. One of the three-person team stayed in the office to answer the phone while the other two were out selling. Ruff would drive as many as 1400 miles over the course of a week. Mills laughs when he recalls the 5000-square-foot warehouse and $80,000 worth of inventory.

“We were a grassroots organization,” he says. “But our goal from the beginning was to give better service to our customers than anyone else, and Dan understood that.”

“I had the gift of sales gab,” Ruff says. “I could find humor in just about any situation. That breaks the ice with people. At 2M we were honest, we gave our customers all the correct information, and we were available 24/7. And through it all, what a luxury it was having Bill as my boss and mentor, along with him being a close friend.”

Ruff became a resource of information and service. Early in his career at 2M, Ruff learned turf irrigation, sprinkler design, residential, commercial, industrial, and golf course irrigation, water treatment, stock water pipelines, canal and reservoir lining systems, and more. New turf irrigation technology was developing rapidly back then, and Ruff learned it all—then went out and sold it. Ruff even started getting calls from civil engineers asking for his advice.

Ruff played a critical role in a memorable project involving an extensive radio control irrigation system at Malmstrom Air Force Base in Cascade County, Montana. After Ruff completed thorough site surveys and detailed proposals, the civil and air force engineers hired 2M over their much larger competitor. This was just one of many major projects that included canal and reservoir lining, oil field frac water depots and pump stations, stock water and irrigation pipelines, residential, commercial, and golf course irrigation design and sales.

During his career, Ruff also served as vice president, secretary, and four-time president of the Montana Water Well Drillers Association, totaling 12 years of service. In 1994, he earned the Trailblazer Award from Hunter Industries, one of the largest turf equipment manufacturers in the world. In 1998, he earned it again—a rare honor.

Additionally, Ruff served on the boards of the Montana Association of Montana Turf, Ornamental, and Pest Professionals; the Montana Nursery & Landscape Association; and the Peaks and Prairies Golf Course Superintendents Association.

“He was helping to grow the company from the get go,” Mills says. “Basically, Dan was a super salesman. He was an employee, but he was like a partner. Forty years later, we have gone from one location to 15 branches plus a corporate office. Dan spent a lot of personal time developing relationships. We’ve been working with some customers’ families for generations.”

Dan has also worked with generations of 2M Co. leadership. When he started, Bill Mills ran the company. Today, Bill’s son Buzz Mills leads 2M. “I worked for Dan in the warehouse way back in the summer of 1978, at the age of 11,” Buzz Mills says. “I watched him paint the first 2M sign.”

“Bill created a culture at 2M that was more like a family than a business. The 1990s brought tremendous growth of sales, new products and locations. Driven by Bill and Buzz, our company footprint expanded dramatically, but the 2M culture and mentality never waivered. That’s what made my career of 43 years at 2M so enjoyable,” Ruff said.

Ruff plans to continue consulting in the industry after he retires. He hopes to spend more time golfing, fishing, and traveling to visit friends and family around the country.

“The biggest blessing of my career is that I have very close friendships with employees, customers, and vendors throughout most of our locations,” Ruff says, “which I feel very fortunate to have, and will continue to have, after I retire. What a ride it has been.”